I say this because 1977 brought us the "nature strikes back" cult classic Kingdom of the Spiders. 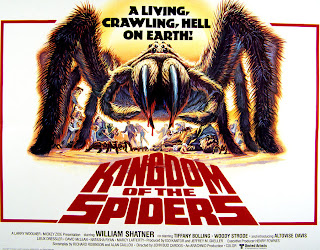 John "Bud" Cardos, who needs to be beaten with a fucking oar, takes us to a small Arizona town (which, really, is no big loss, ultimately... because Arizona SUCKS) that's having a little bit of a problem.

It starts with a prize-winning cow at the Colby farm.  Perfectly healthy in every way until something attacks it.  This brings in the town vet,  Robert "Rack" Hanson (William Shatner in one of his better roles... you know... without all the... pregnantpauses).  We get introduced to Rack with him chasing down a bull to give it its antibiotics.  There's a little bit of confusion because the girl that's helping him is actually his sister-in-law and you get the feeling that something gets nipped in the bud when she referes to him by his brother's name.  The brother died in the Vietnam War but that's kind of peripheral to the plot.  The Shat can't figure out directly what happened to the dead cow but sends a sample off to be analyzed.

Enter Diane Ashley, an arachnologist that has Rack's test results.  The cow died from a massive dose of spider venom.  Rack obviously doesn't believe her because she's a girrrrrrl.  Ashley is adamant that the issue is serious and gets Rack to show her the carcass and its pen.  And then the dog dies.  Ashley runs a quick chemical test (because she couldn't have done that a few days ago and just made a fuckin' phone call) and discovers that the dog died from spider bites, too.  The owners of the dog and cow reveal that they found a massive "spider hill" in the back forty. 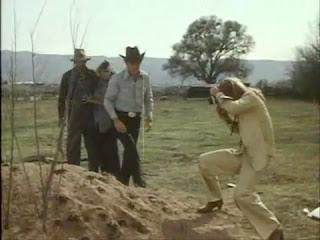 My but that's a fashionable 70s pantsuit.

Ashley theorizes that because of the rampant use of pesticides like DDT, the tarantulas, which are hunting spiders, anyway, are colonizing to attack larger animals for food.  This pretty much gets proven when a bull stampedes out of the barn covered in tarantulas.

And this, folks is why I try to eat organic whenever I can.  This does not, however, eradicate my love of Funyuns.

ANYWAY!  Ashley is pretty damn sure that the tarantulas won't hesitate to attack people and, seriously, where would this movie be without that mental tidbit.  And, for real, the rest of the movie is The Shat and Blondie finding web-strewn corpses everywhere.  Ashley, much like in Jaws, tells the mayor that instead of pesticides, they should be using birds and rats to maintain pest populations but the mayor pooh-poohs the idea saying that rats and birds would freak out the attendees of the upcoming County Fair.  That being said, he sends up a crop duster who promptly screams like a little girl when he finds himself covered with tarantulas and crashes.

We shall call him Princess.

Seriously, from here on out, it's just a matter of time before everybody in town is attacked by tarantulas in some form or another.  Up to and including ACTUAL little girls. 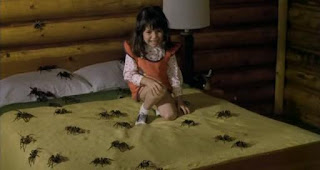 So, this is one of those cult films that become kind of ubiquitous.  It certainly added a lot of new arachnophobic individuals to society, myself included (although that has less to do with the movie than it has to to with my allergies).  Much like Jaws, tarantulas got a whole lot of myths attributed to them after this came out.

Just so you know, a tarantula bite is generally no worse than a bee-sting.  This does not mean that I want the hairy motherfuckers anywhere near me.  With their beady eyes and their eight creepy fuckin' legs and eeeeeeeeeew...  It didn't help that when I saw this the first time my asshole brother kept making crawly hands on my shoulder.  Ass. 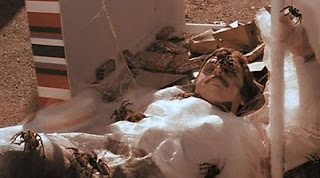 This movie, much like a lot of the Creature Features in the 70s, was pretty damn anvilicious in terms of environmental messages.  The trend at that point suggested that the supernatural was not our worst enemy.  The environment was.  Because we were abusing it.  And in the wake of global warming, they were probably right.  PLEASE DON'T DIE BEES!  I heart you.  Except when you sting me.  The we gonna have words.

A couple of trivia notes.

First, there were 5000 tarantulas used in this movie.  The studio paid $10 each for every live tarantula caught locally which was 10% of the movie's budget.  Tarantulas, though, are cannibalistic, which meant that they had to be kept in individual containers, and shy, which meant they wouldn't actually move toward people without a little encouragement by way of air hoses.

Second, they could never remake this movie today with as many spiders they killed during production.   At least not the same way.  You'd have to expect a lot of CGI and a PETA representative on set.

Third, the director, during auditions and meetings to cast the actors, kept two tarantulas on his desk to weed out the ones that would freak out.  Those that freaked included Barbara Hale and Donna Mills, both of which appeared in killer spider movies later on.

And lastly, there was a SERIOUS problem with itching on set because tarantula hair is used to make joke itching powder and with thousands of spiders around... well... you know...

All in all, I do like this movie.  The acting, for the time and considering William Shatner's record, was really very good.  The plot, although a little simplistic, was well thought out and it's one of the first movies I remember having a downer ending.  Nobody gets out of this alive.

And that, just by itself, makes this movie awesome.
Posted by BobSmash at 12:05 PM