Creature Feature Week: Is That a Cobra In Your Pocket?

About a month after I was born, Universal released one of its last double features.  This double feature contained The Boy Who Cried Werewolf and Sssssss!, a coming-of-age screwball com... wait, no.  I got that wrong. 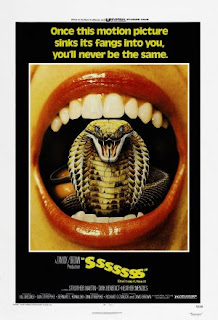 Sssssss! delves deep into the world of a mad... well, really more "drunk" than "mad", herpetologist, his daughter and his unsuspecting intern/lab assistant.

Yeah, I couldn't even type that with a straight face.

So, yeah, anyway.  The movie starts with Dr. Stoner selling a large, moaning, presumed snake to the carnival.  Then Stoner hires David Blake (Pre-A-Team Dirk Benedict), a bullied young man, to be his unsuspecitng intern/lab assistant.  David probably should have known that something was odd when Stoner fed his snake, Billy, a bowlful of whiskey.

Stoner, by the way, believes that the human race is doomed and the only way to survive the upcoming apocalypse is to turn humans into reptiles.  Ummmm... yeah.  So... There's a way to prove a hypothesis.  Stoner is not demonstrating it.  Because he's crazy-cuckoo-pants.

Stoner has David help him feed a poisonous snake with no anti-venom, injects him with an "inoculation" meant to make him immune to cobra venom and salmonella and all that crap.  (Trivia note: Benedict was actually stuck with a real syringe for the scene.  Because he's a method actor or some such bullshit.)

Side effects may include dizziness, nausea, death and gross skin peelies...

He then introduces David to his daughter, Kristina.  They get to liking each other in a "horizontal mambo" sort of way. 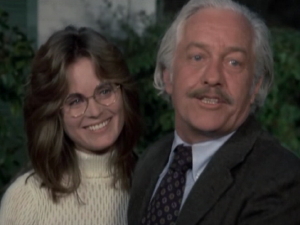 Daddy does not approve and specifically tells her "No intercourse".  Of course, it had already happened by the time he said it but, hey, it's the thought that counts.  In the meantime, a dude that hit on Kristina kills Billy and Stoner sets a Black Mamba on him in the shower.

Reb Brown does have a nice butt.  That freaky toe weirds me out, though.

All the while, David is slowly turning into a cobra.  Because of the "inoculation".  And I SAY "slowly" but it kind of hits him all at once and he changes in a matter of minutes once it finally hits.  While it's happening, his college professor sees him and is knocked out and handcuffed to a pipe in the basement where he is then promptly eaten by a large python. 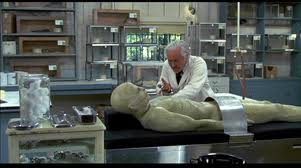 David's transformation concludes, Stoner is killed by an ACTUAL cobra, Kristina found the "snake" from the beginning at the carnival and brings the police back with her.  They kill the real snake and then they all find David-snake fighting for his life against a mongoose... because that's not sterotypical at ALL.  Kristina screams and the movie ends, leaving everybody's fate about as clear as mud.

OK, so, really?  I like this movie, and it was another one that I caught on Creature Double Feature as a kid, but it's a little... tame and boring.  I'm really not sure how this film got the cult following that it has.  It's kind of unintentionally hilarious but not really enough to make a big deal out of it.  I mean, they covered up butts with cartoon tree-branches to get a PG rating.  The concept, though, is kind of awesome.  It's kind of a cross between a werewolf story, Frankenstein and "nature strikes back".

The film, really, and much like most mad scientist movies, is all about hubris, that karmic retribution that a person gets for challenging the gods and the demise of Dr. Stoner certainly fits the bill.  And to make that come through perfectly clear, ALL of the snakes in this movie are real.  Five King Cobras were imported from Thailand to make the movie and the cobra milking scene was authentic except for the bit where Stoner takes the snake by the head where a puppet was used. All 5 snakes were used to film that scene because most of that day was spent keeping them from escaping the enclosure since the snakes wanted to do THAT instead of their fucking job which was rearing up and looking menacing.

The only thing that bugs me about Sssssss!  is the shift between protagonist and victim.  You spend the movie really thinking that David is going to save the day and the twist at the end throws you for a loop. And the undecided ending?  Looks like they were angling for a sequel.

All in all?  Another OK way to spend a couple of hours but nothing to write home about.
Posted by BobSmash at 11:50 AM