Before we get into today's review, let's talk about why this week is going on, shall we?

First off, it's happening because my friends and I at The Incredibly Strange Horror Bloggers Network were wracking our brains over what themes we should cover for smaller cross-blog events and this one just popped right into my head.  I mean it's so obvious.

But, really, we're doing this to celebrate the unsung hero of the horror genre.  The ubiquitous Everyman of fright films that everybody knows but no one talks about.  Well... we talk about them because they're awesome (or awesomely bad) but I feel they don't get enough recognition otherwise.

Creature Features exploit our fears, whether it's of the creatures themselves or the societal issues that the creatures represent, in a unique fashion.  They specifically put a face to our fears and phobias and above that, COLLECTIVE fears and phobias.  But they're simple.  With simple plots and simple characters.  They are not great movies by any stretch of the imagination.

Most of all, though, Creature Features represent a lot of childhoods.  I remember waiting for Saturday morning cartoons to end and the afternoon Creature Double Feature to start on Channel 56 in Boston (that UHF station had a really long range because I watched it in Maine, too).  It was where I watched movies like The Beast from 20,000 Fathoms and Food of the Gods.  It was the one thing in my house, as a kid, that my siblings and I wouldn't fight over.

That's why, this week, we're looking at B-grade schlock, for good or ill, and, well, featuring the creature.

Just to be clear, though, we're not, generally, looking at humanoid monsters, here.  We're talking about the mindless beasts.  The mutated monsters.  The "nature gone wild" movies.  We may touch on the humanoid but we're not really looking at the traditional monsters like vampires or werewolves.  While they count, I almost consider them a separate genre.  I call THAT genre "traditional horror".

ANYWAY!  Today we're going to look at one of my favorites! 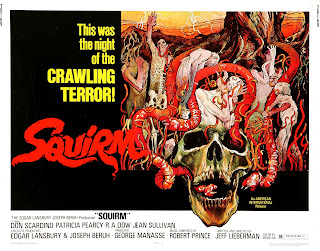 Squirm starts with the backstory.   In text.  On a black background.  Presumably because they couldn't find stock footage of a thunderstorm.  Suffice it to say, there was a thunderstorm.  Oh, wait... they DO show us the thunderstorm.  FINALLY!  Someone with a camera and a lick of sense.  Plus?  Screaming worms.  With legs.

Mick gets dropped off and Geri takes him to the local store where she has to pick up ice to keep Momma from bitching about the fridge.  Plus, you know, salmonella bad.

And then things get weird.  I say weird because apparently no one in the South has heard of an egg cream.

An egg cream, by the way, is just vanilla or chocolate syrup, soda water and a little milk.  I don't know WHY they call it an egg cream because there's no egg OR cream in it.  Mick finds a worm in his and in doing so pisses off the local sherriff who, like all law enforcement in horror movies, is a useless pain in the ass. 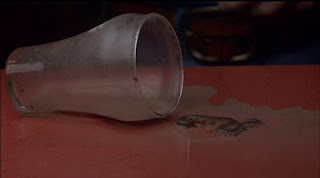 Roger, the aforementioned feeb and legitimate hayseed... who actually spends a bit of time WITH A HAYSEED BETWEEN HIS TEETH, gets all angry because Geri lost his worms and his father makes him go and replace them.  Because his dad picked on him, he eventually ends up like this: 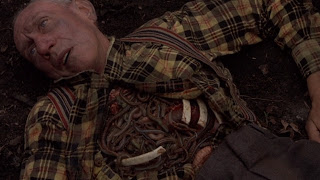 So, anyway, the rest of the movie is all people finding worms that like to burrow under skin because lightning apparently gives ANYTHING super-powers. 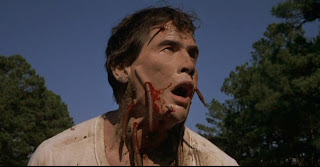 Somebody needs a shave...

I really don't know why I love this movie.  There's really nothing redeemable about it.  This is just deliciously awful, b-grade, "nature strikes back" madness.  There's definitely no social message in here.  I'm pretty certain that this was made just to give Rick Baker a chance to cut his teeth and make people say "icky".

The acting in here, except for Mick, is just fucking atrocious.  The pregnant pauses and syrup-y sweet Gone With The Wind accents just make me want to strangle someone but, much like 2000 Maniacs, the chicken-fried horror works.  The acting makes this movie HILARIOUSLY awful.

Plus there's enough Pabst Blue Ribbon in this movie to drown about 50 hipsters.

If you're in the mood for brainless 1970s backwoods creepy-crawlie-ness, this is an awesomely horrible way to spend a couple of hours.  Just fry you up some chicken and get you some collard greens and corn bread and it's a mo'fuckin' PARTY!
Posted by BobSmash at 1:28 PM