On that note, we're going to bypass the supernatural crap and get straight to the inhumanity of man. 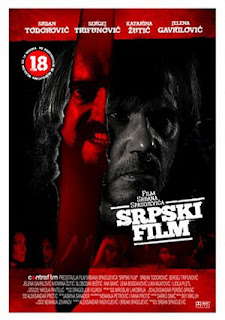 This, Chernobyl Diaries and Hostel are the prime reason that I will never, in my life, visit Eastern Europe.

It's not that this movie is scary but... well, we'll get to that in a minute.

Milos storms out but managed to get slipped a mickey by Viklos' on-staff doctor.  He wakes up with no memory of it and wobbles himself back to the now abandoned set and finds a set of tapes.  Like a moron, he watches them and discovers that he was drugged to the point of animalism and in his highly suggestible state, was filmed raping a woman to death, getting raped himself and generally being kind of a douche.  A girl that defends him has her teeth removed and gets suffocated.

And it only gets worse from there.

Now, I understand that this is not an accurate portrayal of Serbia or its culture but the thought of this film actually being made as "a diary of our own molestation by the Serbian government.." is still disturbing on a socio-political level.

It's not that this is a bad film.  In fact, for what it is, it's rather good.  I enjoyed the concept in and of itself.  Well... not "enjoyed".  More like "found interesting". The problem lies in the content and the imagery.  I have absolutely no problem with controversial material to make a point.  I have no problem with harming a cinematic child if it's integral to the plot and, frankly, it's integral, here.  That doesn't make watching it any more comfortable.  It's SUPPOSED to bother you and it does so with gleeful abandon. 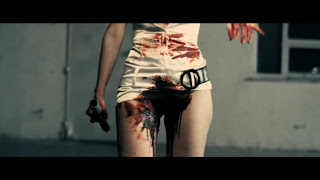 And, really, when you watch the movie with a detached eye, the Grand Guignol nature of it pushes the movie JUST to the edge of parody.  Yes, it's blacker-than-black but the over-the-top nature of the goings on are almost horrific comedy.  They aren't "funny" per se but the manner in which they are portrayed is SO gruesome that they border on the absurd.  Let's face it, though, this movie is still GRIM as FUCK and it's hard to achieve that detached state of mind.

That said, I ONLY recommend this movie to the hardcore viewer.  The imagery may be heading toward absurdity but it's still pretty fuckin' disgusting and, frankly, this movie is offensive on just about every level. There are no taboos in this film and that explains why it's been banned in a whole lot of places.

If you think you can take something this dark, go for it but don't say I didn't warn you.

I'm off to watch Disney movies to wash the gross out of my brain.
Posted by BobSmash at 3:10 AM