Not Sure if Wonderland or Just Cray-Cray...

OK, so, the whole Alice in Wonderland thing as a metaphor is a little played out but we're never gonna get rid of it so as long as things aren't utterly literal, we'll just have to deal with it.

Alyce Kills, however, is pretty fuckin' literal.  And that hurts me. 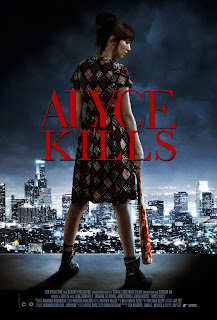 There's kind of not really a lot to this one.  Alyce, a young woman in a dead end job with no prospects who's behind on her rent and has a cheating boyfriend, goes out on the town with her bestie, Carol.  Said bestie takes her to get wasted on cheap liquor and red velvet cake and promises of girl-on-girl action that never materialize because they have the girl version of whiskey dick. 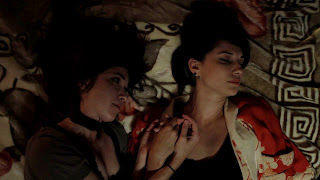 And then promptly pushes said bestie off of the roof of her apartment building.

It was totally an accident but she pretty much snaps.  She doesn't die right away but that does nothing to assuage Alyce's guilt.  At all.  In fact it makes her feel worse.  She spends the rest of the movie going mad and following the white rabbit (drugs) down the rabbit hole with the help of Carol's former dealer who spent a great deal of time trying to figure out exactly who she is and a steroid-riddled fuck-toy with back-ne who likes to punch.  Alyce apparently likes it so who am I to judge. 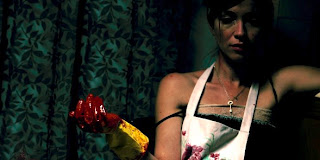 Suffice it to say that this one is a little off.

I'm not saying that this is bad and I kinda dig both the idea and the lead actress but it's something that I thought I was in the mood for and I wasn't.  I think I need to wait until I'm in the mood for psycho-thriller and watch it again.

You might want to give it a go, though.  Let me know what you think.
Posted by BobSmash at 1:40 PM