In the annuls of teen horror, there is a LOT of cheese.  In 1998, Robert Rodriguez brought us a surprisingly refined plate of warm brie with The Faculty.  Unfortunately, he also brings us this poster which got really old after Scream, Final Destination and every OTHER teen horror film used the same fucking layout. 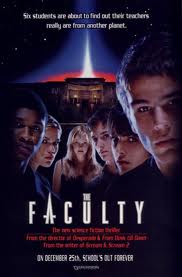 Our story begins at Herrington High School with the football coach (Robert Patrick) going completely schizoid and, after a budget meeting, attacking Principal Drake (Bebe Neuwirth in her goth-y, 40s pinup, Bettie Page bangs face).  He gets a little help dealing with Drake by way of Mrs. Olsen (Piper Laurie) and a pair of scissors.  And thus our story of alien invasion takes off. 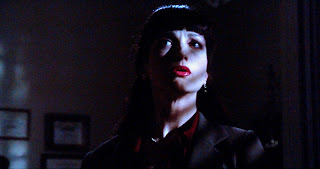 All she needs is a riding crop and a nipple-less leather bra.

Then we get to meet our main characters.  The nerd, Casey (Elijah Wood and his gigantic blue peepers), the head cheerleader and lead mean girl, Delilah (Jordana Brewster), the football player, Stan (Shawn Hatosy) and his friend Gabe (Usher Raymond.  Yes, THAT Usher.), the drug dealer, Zeke (Josh Hartnett), the psuedo-lesbian goth chick, "Stokes" (Clea Duvall) and the pretty, Southern new girl, Marybeth (Laura Harris).  They're all "Oooooh, it's the 90s and I'm all grungy and self-reliant even though I'm an emotional wreck and I would totally take myself out Cobain-style if it wouldn't cause my parents any undue hassle." 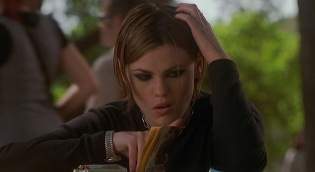 Sometimes I cut myself to relieve the pain!

So, yeah.  Casey finds some weird thing on the football field where he had been resting after a morning full of torture by the football team.  I figure he was working on the logic of "the last place they'd look" but whatever works.

Anyway, he takes it to his biology teacher (Jon Stewart) who discovers that water revives it.  On top of that it replicates itself and it bites.  And this is what we learn when we expose ourselves to previously unknown life forms. 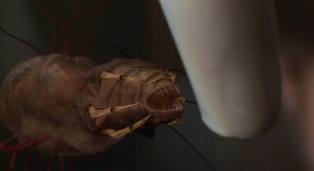 Casey and Delilah get a front row seat to the school nurse (Salma Hayek) getting attacked and go to the police.  We all know how THAT goes.  Useless.  Fucking useless.  Casey gets accused of seeking attention, his parents toss his room for drugs and he gets to be all angsty about his sanity being questioned.  In the meantime, Stan gets cuddled by a deteriorating elderly teacher who warns him that the aliens are out there and they want everyone.

He manages to tell the others who, for some reason, work well together even though they all kind of hate one another.  Going back to Professor Furlong, Zeke asks about the creature.  Furlong gets weird and tries to convert Zeke who then cuts off Furlong's fingers with a paper cutter and stabs him in the eye with his own little homemade psuedo-cocaine which, because it's a dessicant, kills the aliens.  YAY!  They have a weapon!  Fight on, American teenagers!! 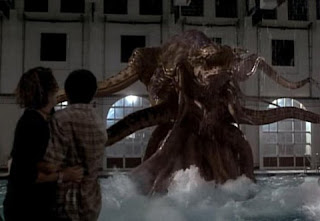 I don't know about you but this makes me fear public pools.

Suffice it to say that this little gem combines the best of Invasion of the Body Snatchers and The Thing and rolls into a self-loathing little ball of 90s slacktivism.

It's GLORIOUS!  The paranoia of alien invasion combined with the natural fear of teachers exhibited by the outcasts of school society who have no reason to believe that teachers are going to protect them at all (in a pre-bullying awareness American society) is poignant.  The acting is over-the-top and the plot is gleefully post-50s monster movie making this film one of my favorites.