Note to self:  DO NOT get on Netflix whilst in the throes of insomnia.  It makes you make bad life choices. 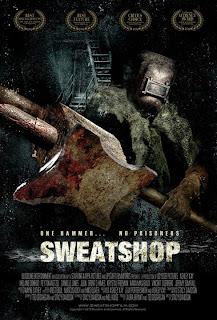 The story for this one is simple.  Tooooooo simple.

A bunch of young adults break into an old factory to hold a rave.  Because raves are still popular.  As they're setting up, they're hunted by the freaky-ass mutants that live there.  The first to die?  The lesbian who's apparently not as lesbian as she'd like people to think.  Her name is Lolly.  Because she's got an oral fixation on top of her most goth haircut, her gothapotamus outfit and her "OMG, I shouldn't be able to run in these boots" boots. 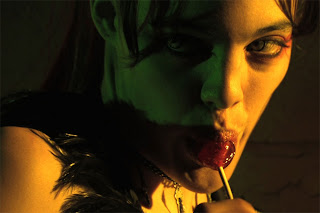 All that sugar will rot your teeth, there, les-faux.

And the rest aren't really killed right away but they totally should be.  We've got the slimy redneck who's somehow financing a part of this, the jealous bitch, the stupid flitter-fairy perky-goth in her skankenstein-wear and her yarn falls, the redneck's punk-rock brother with the serious mohawk who suffered from a mysterious "snowballing" incident (if you need me to explain "snowballing" let me know but you should probably check urbandictionary.com first), the DJ, the smart girl who SHOULD have been the one to survive but didn't and the final girl who is, in actuality, a pimp.  The other girls there are her hoes.

Actual hoes.  Hoes are a real thing.  People pay to have Skankenstein get their dick wet.

(The management would like to alert you to the fact that sex work is actual work and no one should be shamed for it.  My choice of the word "skankenstein" is purely for humorous reasons and in no way represents my actual feelings towards sex-positive individuals whose affections are negotiable.) 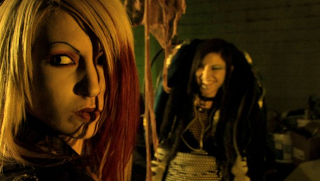 I know the director was trying to be all subversive and shit but, damn, really?  There's only so far you can invert the final girl before it looks like you're trying too hard.

They're all being chased and murder-fied by a dude with an anvil on a stick and his creepy family.  And that's all we'll ever know about them. 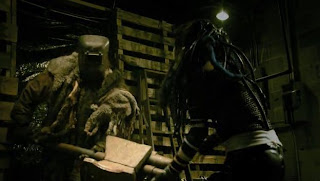 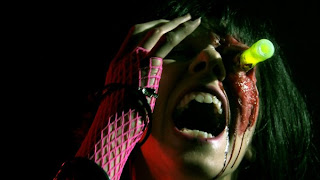 This happens.  No, really.

Suffice it to say that I'm blaming my watching this on insufficient sleep.  I think this could have been great if they had moderated the volume levels, written a better script, left out all of the macho, homophobic bullshit and, you know, acted well.  I do give it props for using practical over digital effects but it's still awful.