As a happy coincidence, my Adventures in Netflix brought me to yet another "killer car" story.

Not a GOOD one, but there you have it. 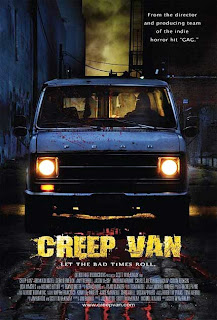 When he finally DOES get a job he can keep and that he's good at (his boss often sending him into management-like situations), he runs into problems with just not having a car.  Late because of the bus schedule.  No carrying capacity.  I mean, seriously.  Little old ladies in third world countries can carry more on their heads than this guy.  So, yeah.  He finds an awesome white van and wants to buy it but there's a problem. 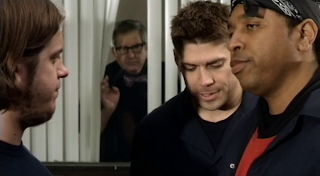 Well, a problem beyond the two fuckwits on either side of this picture.

Yeah... the van he wants to buy?  Totally belongs to a serial killer and it's booby-trapped to Hell and back.

And it's not like the current owner is subtle about it.  He starts out with hitchhikers and such but really, the dude has no sense of propriety when choosing places to slice and dice.  The driver murders one woman in a grocery store parking lot in broad daylight when she asks for a test drive.  Of course, this happens AS Campbell is calling about the van himself so he's a little taken aback by the screams. 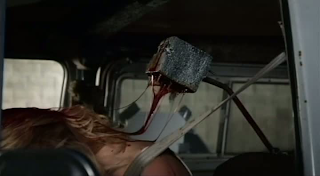 Well, that's overly gooey.
The driver smashes a girl against the side of a building AND goes after the mechanic that was trying to rip her off. 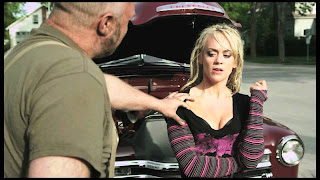 Tonya Kay is awesome.  She needs bigger parts.  Not THOSE parts, ya pervs.

So, yeah.  I'm sure the word "surreptitious" never even entered this guy's vocabulary.

You know.  I kinda like this one but not really.  I mean, it's not great or anything and there are parts of it that just don't make any sense at all but b-grade schlock isn't really meant to be intelligent.  The fact that they gave Creature from "Who Wants To Be a Superhero" a speaking part (that would be Ms. Kay, above) means that they weren't particularly going for an Oscar.  The fact that the aforementioned cameo was the best part of the movie, on the other hand, just tells me that tiny, be-dreadlocked, vegan burlesque dancers need to be on film more often.

The problem with this film is that there's not enough horror to be really scary and not enough humor to be really funny and the two never actually meet.  If you're going to make a horror-comedy, you should try to amp up both parts and make them work WITH each other and not as two separate things.

I do appreciate the use of practical effects, though, and it shows they were trying to make a good piece.  It just wasn't good enough.