Occasionally a horror film comes along that's a little outside the box and makes you think.  There's that little piece of humanity that peeks through that tugs at your heartstrings or there's a glimpse of insanity that makes you wonder how we survive as a species.

Occasionally, you get both and that usually makes for a wondrous experience. 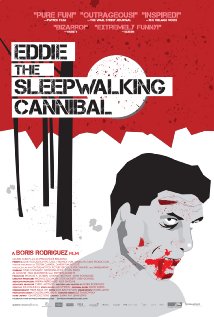 Eddie the Sleepwalking Cannibal is one of those movies.

Officially billed as a horror-comedy, Eddie is much more than that.  It's a buddy comedy, it's a "mental illness drama", it's A Bucket of Blood and The Portrait of Dorian Gray and Nell all rolled into one.

Lars is a former big-shot painter that's moved to Canada to teach at a local art school.  The school is thrilled to have him because his name will give them some credibility and, hopefully, keep them afloat for a few years.  One of his teaching duties, though, is to keep Eddie entertained in class.  Eddie is a brawny, developmentally disabled mute who likes to eat Yummy-O's out of the box and paint in watercolors.  This is also his primary means of communication.


After the death of Eddie's primary caregiver, one of the stipulations of her will was that the school would find a means of taking care of Eddie so that they can still get an annual donation from her estate.  Lars, being the goody-two-shoes boy scout that he is, volunteers for the job.


So, Eddie moves in at his place and, the first night, Lars checks in on him just to find that he's missing.  He heads out into the snow and discovers Eddie, hovering around in his tighty-whiteys, covered in the blood of a rabbit.  As disturbing as this is, it inspires Lars to paint again.  We find out that Eddie's done this before in times of great stress and that once he gets acclimatized to new situations the behavior stops.

After selling the painting and donating the money to the school, Lars enjoys a more localized sort of fame that makes him feel good about himself, again.  It's a little addicting so he, well, encourages Eddie to indulge in his nightly habits with the neighbors, with the out-of-towners who decided it was funny to pick on the less-advantaged and the town in general.  All of this inspires more and more fantastic art that sells for thousands of dollars.


All the while, Lars and Eddie develop something more than a friendship.  Lars and Eddie love each other.  It's almost romantic but not quite.  It's kind of sweet, in a disturbing sort of way.  I mean, there's no naked, sexy, fun time, which probably would have been more disturbing, but the bond between them is definitely more than brotherly.  This kinda gets in the way of the actual female love interest.

I have to say that Boris Rodriguez did a fantastic job with this and it's really no wonder that it won several awards on the festival circuit.  The satire of the art world is subtle but pervasive and the delicate care taken to explore the relationship between a disturbed man and his caretaker is sublime.  Plus, it's funny.  It's very light-hearted, as macabre as it is, and that keeps it from being TOO cerebral.  I highly recommend this movie.
Posted by BobSmash at 2:13 PM