In 1988 I discovered many things about myself.  I was 15 and, although I was a horror hound, even then, I never really got into the psychological aspect until then. 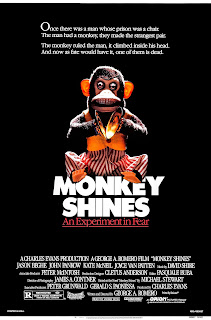 As a happy coincidence, ALSO in 1988, Jason Beghe starred as possibly the hottest quadraplegic EVER in the psuedo-nature-gone-wild horror classic Monkey Shines, written and directed by the master of the gigantic glasses, George Romero.  And it's because of him that I am proud to admit that A) I like em muscle-y and fuzzy and B) I am an ass man.

The movie opens with a training montage which is kinda funny because normally those happen in the middle of the movie when the protagonist is in need of winning some kind of event or beating up bad guys or even defending one's self against a bully, but no.  We get this at the beginning because we have to show that we're dealing with a young man in the prime of his life taking care of his body because his body is a temple and I REEEEEAAAALLY want to worship at it because Jason Beghe was DELICIOUS!

So, after loading up a backpack with bricks, Alan Mann (who's name isn't symbolic or anything), goes jogging.  With bricks.  See, that's the part I don't get.  Running is hard enough without carrying the equivalent of a small person on their back.  Meh, to each their own.

So, yeah.  Because he doesn't want his mom touching his man-bits anymore, he lets his buddy, Geoffrey (character actor John Pankow) set him up with one of his test subjects, Ella.  A capuchin monkey that has had human brain tissue injected into her own itty-bitty-schnooky-wookums-extra-kyoot brain.

Ella (played by Boo and voiced by Frank Welker, best known for his work on Scooby-Doo) is a helper animal and this is not outside the realm of possibility because helper monkeys are a real thing.  Maybe without the genetic modification but they do exist.  It almost makes me want to be quadraplegic.  Because then my husband would be forced to allow me to have a monkey.  I want a monkey.

In the process of bonding with Ella, he also starts a relationship with her trainer, Melanie.  This bonding doesn't exactly work out that well because Ella, mistress of the kyoot, is Alex Forrest with a prehensile tail and she won't be IGNORED, Dan...

(For you young'uns who don't know who Alex Forrest is, go watch Fatal Attraction, lock up your bunnies and get back to me.  I'll wait.)

So, yeah.  Ella is initially protective but when she overhears that Alan's condition may be reversible via surgery she goes apeshit.  Yes, yes, I know.  Awful pun.  It was intended.  Let's move on, shall we?  She kills Alan's former girlfriend AND his former doctor, who happen to be dating, by fire.  She electrocutes Alan's mom in the tub (I'm thinking Alan wasn't too upset about that one).  She kills Geoffrey with the shot that was meant for her (Sodium pentobarbitone, also known as Nembutal and, in humans, it's a relatively mild barbituate/sedative although it can be used for euthanasia in humans in sufficient doses.  To house pets, though, it's probably known by some kind of gloriously Lord of the Rings-like name along the lines of The Great Needle that Brings Endless Nappy-Time or The Angel of Post-Walkies).

She manages to take Melanie out of the action but doesn't kill her.  Alan stops her before Melanie discovers a new career as a human torch.  Also, that kept Marvel Comics off of Romero's back.

Fortunately, Alan knows how to calm her down and he convinces her to give him a cuddle before he RIPS OUT HER THROAT WITH HIS TEETH AND SHAKES HER LIKE A DAMN RAG DOLL!!!

The movie ends with a really bad dream.

This move did HORRIBLY in the box office and I thoroughly blame this on executive meddling.  They not only made Romero film a happy ending but they tacked on the shocker at the end, too.  If they'd have left him alone, KNOWING that the man knows what he's doing and is damn near one of the best there is at it, this movie would have made movie history.  As it is, I can forgive the ending because I enjoy the movie as a whole.

No, really.  You've got intrigue, helplessness, obsession and real, legitimate fear.  Other than Ella having something approaching human intelligence, it's not like monkey attacks don't happen.  A chimpanzee can rip your arm off so I'm not at all suggesting that a capuchin with a straight razor is unbelievable and there are PARROTS that display this level of romantic obsession so a monkey?  Just put that little fucker in a curly blonde wig.

Seriously, though, aside from the man-candy and the monkey business, the script is tight, it's not confusing at ALL and it's just good, old-fashioned, thrill-a-minute horror.  I feel bad that this flopped for Romero because it really didn't need to.  It's a good movie and it's often overlooked.  The fact that it sent Romero back to indie horror isn't necessarily a bad thing, though, and I'm all about the fuck-you.

This is one of my favorites.  If you haven't seen it, I recommend that you do.

And then?  Never go to the zoo again.

Unless it's to procure me a monkey.