I know you're gonna think this is weird but I love rats.  Rats are as intelligent as a dog and they can be trained to do just about anything except not poop wherever they want to.  They come in a variety of shapes and sizes and they make fantastic pets for little ones because they're just so fuckin' chill.  They're not as nittery (nervous and jittery) or fragile as a lot of other rodents and they live longer than a hamster or gerbil, too.

That being said, the 2003 remake of Willard is kind of awesome in its own quirky little way. 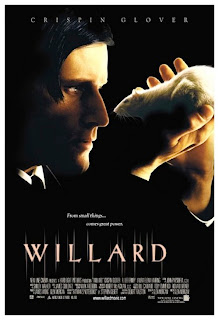 Crispin Glover is the titular Willard Stiles, a socially inept nerd who lives with his terminally ill, utterly overbearing mother (Jackie Burroughs)... and when I say overbearing I mean "wants to look at his poop to make sure he's regular".  Eew.  He works at his father's old firm which, for some reason, he does not run.  Probably because his new boss (R. Lee Ermey) is cruel and vicious and steamrolled over Willard after his dad's death to gain control.  Frank (the boss) is not above humiliating and playing pranks on Willard in front of the entire office.


Now, because he has no control over his own life, Willard becomes OBSESSED with the rather large rat colony that's infested his family home.  He adopts one of them as a personal friend and names him Socrates but he befriends the whole colony along with a HUGE rat that he names Big Ben (played by a Gambian pouched rat which is the size of your average house cat and has big ole cheek pouches like a hamster... they're adorable and I want one but, because of monkey pox, they're outlawed in Ohio).

Willard spends an inordinate amount of time training his new friends.  Training them to attack and shred on command.  His mother, hearing the rats, panics and falls down the stairs and Willard is alone and destitute since the payments have fallen far enough behind that the house is likely going to be foreclosed upon.

All the while, Cathryn, a co-worker, has a little crush on Willard (although, we're not sure why) and protects him when she can.  After his mother's death, she brings him a cat to keep him company.  The rats, who are suspicious of cats in general because... y'know... rats, kill the poor kitty to the strains of Michael Jackson's tune Ben which about the love between a boy and his rat.  Which isn't creepy at all.  And which is why I love the song.  Because it's creepy and inappropriate.

It's at this point when we realize that neither Ben nor Willard particularly trust one another.  This is probably because Willard has thrown Ben down the basement stairs once too often.  Ben and Socrates, though, get to go to work with Willard and they discover a note saying that Willard has been fired.  Socrates gets loose during Willard's confrontation with Frank and frightens a co-worker.  This leads Frank to beat Socrates to death which sends an already fragile Willard completely binkers.

This makes Willard depend on Ben.  Not optimal, but necessary.  Ben is more than willing to lead the horde of vermin toward the untimely demise of Willard's former boss.  Willard takes the lot of them to the office whereupon, on Willard's command, they swarm out of the antique elevator and murder Frank in the face.

After that, though, Willard finds that he still doesn't trust Ben so he tries to get rid of him and, because Ben leads them, the other rats.  Ben, of course, LIKES converting oxygen to carbon dioxide and leads the army of rats against Willard.  Willard survives, but barely, and ends up institutionalized, befriending yet another white rat which would have shut down any other mental health facility.

Now, it's been a while since I've seen the original and that's gonna have to change because the remake, although not billed as one, was kind of amazing.  I mean, Crispin Glover is always delightfully creepy in that "get away from me and comb the crap out of your Alfalfa-do" sort of way and he was probably the most perfect pick for the title role.  The novel, The Ratman's Notebooks, on which the movies are based (and which cost me a pretty penny on Amazon when I bought it years ago because it's out of print), gives us a much clearer picture of the slow descent into madness (of which I am so fond) but even without that, Glover shows us a psychotic snappy-snap that's expected but still fun to watch.

I mean, you feel bad for Willard, you really do, and when he DOES get his chance at revenge you find yourself cheering a little.  Of course, this, ultimately, makes him into the villain he didn't want to be but watching him grow a pair and defend himself is a satisfying movie moment.

This one isn't for most folks.  It's a little cerebral, even considering the subject matter, and there's not a lot of gore so it might not meet gorehound specs but I think it's just peachy.
Posted by BobSmash at 10:00 AM