So, I've already covered Fright Night and declared it a minor masterpiece of the comedy-horror genre.  Today we're gonna cover the lesser known but still eminently enjoyable sequel, Fright Night Part II.  Because it has the most original title in the world and Aqua-Net encrusted vampires on roller skates and that makes it awesome just by itself. 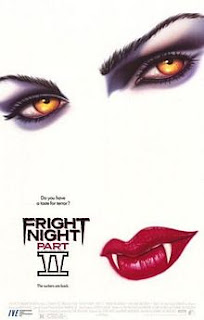 Shortly after the events of Fright Night, Charley Brewster is away at college and going through some serious psychotherapy.  He's got school and his own dorm room and a girl that won't touch his no-no bits and a hefty case of self-doubt that's nagging at his ability to believe that Jerry Dadridge was anything but a particularly gruesome serial killer.  Why he's questioning this is not really discussed but I'm fairly certain it's because he's stupid because he was RIGHT THERE!  His shrink, though, is quite helpful and sets Charlie on the way to sanity and clean living.  Not that Charlie was doing anything bad.  Charlie just likes clean living.  Only not really because he's a college student and messy upheaval is S.O.P.

Now, since Charley doesn't believe in vampires any more, he and his new girlfriend go to visit Peter Vincent who is a burnt-out shell of a human being that KNOWS that the forces of darkness are out to murder us all in the face.  Charlie and Alex feel bad for poor Peter but on their way out, Charley sees four coffins being taken out to a car and four rather odd individuals stepping into an elevator.  Like any college boy, his penis yanks him firmly in the direction of the one woman in the ranks who's all mocha-skinned and exotic-looking.  Her name is Regine.

Charlie and Alex drive back to the dorm and they start to make out but he pulls back and sees Regine's face.  Alex, like any other woman who finds out that her man is fantasizing about other women, understandably storms off not realizing that she's being tailed.  Alex gets into the dorm safely but another girl leaves so she gets to be the new prey.  And it's kind of hard to believe that she has no idea she's being followed because Belle (the big-haired queen above) is on fucking roller skates.  ROLLER SKATES!!

Alex still has problems, though, in the form of Louie, a balding, long-haired-hippie-fuck idiot werewolf who's just climbing into Alex's window when she, obliviously, shuts the window on his claws, snapping them off and sending him plummeting a story or two into the bushes below.

Charley, in the meantime, is having dreams about Regina biting him and his shrink tells him that occasional reversion is perfectly natural and recommends a hobby like bowling to take his mind off of things.  Of course, this only lasts as long as Charley doesn't see Regine so when he DOES, he stalks after her, climbing a fire escape and seeing his friend get munched on by Regine and Belle.  Charley, naturally, runs off to find Peter and the both of them crash Regine's party where they find his buddy unharmed and Regine slinks her way further into Charley's horny-monkey brain.

She manages to convince Charley that she's a performance artist and that what he saw was an act.  Peter, of course, doesn't buy it and he survey's the scene with a mirror.  He huffs out and gets cornered by Regine who, in standard villain fashion, reveals herself as who she is, Jerry Dandridge's sister and she wants revenge.  Charley, in the midst of all of this returns home, blowing off a date with Alex, and goes to sleep.  Regine stops by for a quick bite.

Peter, stopping by the next morning, tries to warn him but Charley's in denial again.  Peter washes his hands of the situation and goes home to pack.  Charley, though, begins to show signs of conversion.  Aversion to sunlight, sensitivity to garlic... you know.  Allergies.  He then catches a news report that snaps him out of denial again.  His buddy is dead.  He tries to find Peter but he's gone.

Louie is still stalking Alex.  He manages to show Alex that he's a werewolf and chases Alex and Charley through the library.  Alex stuns Louie with a mouthful of wild roses (allergies again) and then they get arrested by campus police.  At the same time, Peter breaks into the set of Fright Night and tries to kill Regine on camera.  Oops.

Charley and Alex get bailed out by Regine and Charley's shrink respecitvely.  The shrink is now a vampire and tries to get a bite of co-ed.  Alex incapacitates him and assumes his identity to break out Peter.  Charley, though, is under the thrall of Regine.  Belle, Bozworth (Regine's Renfield.  He eats bugs but only after identifying them.  I think he's OCD.) and Louie all get appropriate deaths and the final confrontation begins.

As a continuation of the world created in the first movie, this is an extra-glam trip through Crazytown and it's DELICIOUS!  I mean, it's b-grade, at best, but it's still funny and moody and conceptual, all things that made the first Fright Night so wonderful.  It distinctly lacks all of the Hitchcockian undertones but they really aren't needed at this point.  This is about a kid's fight for sanity and the realization that he's not actually crazy.

But, on the other hand, this was an extension of the "vampire as social disease" theme that's so prevalent in movies that actually present vampires as monsters and the direct, almost anvilicious, "loose girls will give you crotch-cooties" message is abundantly clear what with the actual girlfriend being pure and chaste.  Regine, though, is an oiled snake, slithering through her scenes with the grace of a cheetah, her almost-whiskey-throated alto burrowing into your brain and seducing the audience as well as Charley.  I feel bad that Julie Carmen's career didn't really take off but we still see her around.  Of course, she's almost 60, now, so she's probably not doing that much slithering unless she's really in the mood to snap a hip.

I still think this was good film making, though and that this didn't get nearly as much press as it should have.  I know people that didn't know there WAS a sequel to Fright Night and it's always a pleasure to introduce them to it.  Yes, it's silly but it's fun.

Just remember.  You're supposed to bite her on the neck.
Posted by BobSmash at 3:32 PM