OK, so the thought that Australia wants to murder you in the face has spread to outlying areas like New Zealand and Tazmania.  This is bad... well, bad for anyone but a horror fan.

The 2009 After Dark Horrorfest included, as one of its 8 Films To Die For, an Australian mid-range almost barker called Dying Breed.  It has a little basis in fact but, much like any movie that includes the words "Based On A True Story" on the poster (Dying Breed does not, by the way), the factual elements are glamorized and enhanced for the sake of the story. 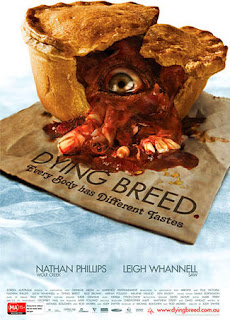 We start with a flashback to 1820 or so, with the local constabulary hunting down escaped convict Alexander Pierce (who was a real dude) who, when he IS just about caught and going to get shot, takes a bit out of the policeman's neck.  He's known as The Pieman.  This is important.

Fast-forward to the present (and past the opening credits because who wants to watch those anyway) where we find Nina and her boyfriend Matt who are on their way to Tasmania to find the supposedly extinct apex predator, (or at the VERY least extremely endangered) the Tasmanian Tiger (or, as it's more properly called, the Thylacine or Thylacinus cynophalus, Greek for "dog-headed pouched one").  One would think that she wouldn't bother since it's been reportedly extinct since 1936.  I mean, seriously, it's like planning a dodo dinner.  It HAS kind of reached a "cryptid" sort of status, though, as sightings are still reported.  Nina, naturally, is spurred on by the fact that a fresh footprint was discovered by her older sister right before she vanished near the Pieman River.

Of course, they bring along their friends Jack and Rebecca who offer a bit of financial and moral support to the scientific cause.

The group gets on a ferry and Matt, trying to be all personable and charming, asks a little girl what she's playing when he finds her doing something with a bunch of yellowing teeth.  She bites him and he deserved it because he was STUPID!

Then they get to their destination and Jack, because he is a colossal fucking moron, deliberately punctures one of the tires of a local's vehicle.  Of course, HIS car's been scratched in return and this makes him angry because he's apparently an entitled prick that doesn't believe that he's deserving of retaliation.  Later, in their rooms, Jack and Rebecca are in the middle of a little "down-under" when they discover that they're being watched.  Jack, still naked, chases the voyeur down and gives him a whuppin'.

The next day, they take a boat to their campsite and that evening, Matt and Nina actually find a Tasmanian Tiger.  She tries to get a picture but it runs away.  The rest grab their cell phones and give chase.  Rebecca, because she's had sex, gets killed and, not surprisingly, eaten.  Cannibal's, y'see.  You guys thought the extinct animal was gonna be the monster, didn't you?  Nooooooope.  This is all Texas Chainsaw up in here.

So, yeah.  They regroup, Rebecca is discovered to be missing and Nina has blood on her pants.  While looking for Nina, they find the little girl from the boat.  In their dealing with her, she drops a picture of her sister.  The little girl snatches it up and exclaims "It's Mama!" to the confusion of fucking everybody.  The girl's "father" shows up and agrees to help our gang find Rebecca.  He takes them to an old mine and warns them of booby traps.  He's not going any further.  No, really, he isn't because he gets murdered after he leaves them to the mine.

Jack finds Rebecca's phone and jacket and, in his paranoia, shoots a local and pins him to a tree through his cheek because everybody that's in the midst of panic is like fucking Robin Hood.

So, they get the geezer peeled off of the tree and keep searching.  They find a cabin and, lo and behold, the dismembered remains of Rebecca.  Jack, because his panic buttons are pushed entirely too easily, steps into a bear trap which causes him to flail like a Muppet™ and fall, catching his HEAD in a bear trap and that's the best scene in the entire movie.  Nina runs screaming like a little girl and Matt chases her.

Chase Nina but, in standard horror movie fashion, she falls and injures her leg.  She manages to hobble her way to a bridge where the local cannibal clan informs her that her sister was fertile and had a kid but she escaped and jumped from the bridge.  There's heavy impliciation that Nina will be used for the same purpose, because even inbred cannibals know that incest can only go so far when it comes to genetic diversity.  Of course, her pretty, blonde head was all "What the fuck?!?"   When Matt gets there, the only one remaining is a village woman who cuts her own throat.  Presumably from guilt over, y'know, kidnapping, torture, rape, murder and possibly even jaywalking.

So, Matt makes it back to town and gets the police involved.  He gets a mug of something tea/coffee-like and discovers that he was given a paralyzing agent.  In his drug-induced paralysis, one of the locals tells him that, like the Tasmanian Tiger, their clan must stay hidden to survive.  Because cannibal clans sort of force themselves into hiding so that their activities aren't reported.  Nina's set to be raped, Matt's tied to a chair and Nina's niece is peckish.  The End.


This is another one of those movies that I can't really say whether I liked it or not.  I mean, it's heavily derivative, INFESTED with tropes (and you know I love them but too much is too much) and relies too much on the cannibal angle for the scares when, seriously, it's not new anymore.  The hunt for the extinct animal seemed like a more interesting story and had the film makers gone with that angle, the movie could have been AMAZING.  Instead, they gave us a weak cannibal clan, allusions to Deliverance and an arrow through the cheek.

I'm not saying to skip it.  I'm just saying that there are better ways to spend your time.  But if you have a couple of hours to kill and you're not, say, washing your socks, you could give it a try.
Posted by BobSmash at 6:07 PM