I have a secret.

I have a soft spot in my heart for shark movies.

Don't get me wrong, sharks freak me right the fuck out and I blame that firmly on Steven Spielberg and my parent's poor choice of going to a drive-in double-feature of Sleeping Beauty and Jaws when I was a toddler.  Ask my mom.  She thinks it's fucking cute.  Yeah.  Maleficent and sharks.  What a lovely, non-nightmare-inducing night of family fun, there, parental units.  I love you, too.

ANYWAY, we all know that the wildlife Down Under carries a grudge.  Really, if you're visiting Australia, you may as well just stay in the hotel room and order postcards from the gift shop downstairs instead of actually going outside and taking pictures.  Better yet, don't go to Australia in the first place.  I would love to visit but I rather like my extremities where they are. 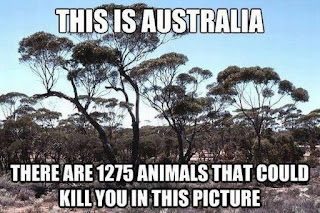 So, there's that.  NOW, let's take everybody's favorite natural disaster, the tsunami.  A wall of water, wiping out miles of tourist-friendly coastline and the occasional nuclear power plant.  (Too soon?)

You want to know what lives in water?  Go on.  Guess.

Yes, ALL of this gets tossed like a house salad in the Australian indie-film BAIT.

Don't get me wrong, it comes together not nearly as lame as it sounds.  It's actually kind of a fun concept.  Survivors of a natural disaster are trapped in an underground grocery store with a Great White shark.  Not only that but, of course, one of the survivors (Julian McMahon) just tried to rob the place and two of the characters have had run-ins with sharks before (with disastrous results).  I will say that I enjoy Xavier Samuel in his role of Josh, the ex-lifeguard.  It's not nearly as bleak as his showing in The Loved Ones (which was great in context and highly recommended) and it's nice to see him take charge.

I'm not saying this is a great movie by any stretch of the imagination but the acting is good and the premise is at least somewhat fresh.  They switch between two groups of survivors, both dealing with what is presumed to be the same shark, and this is largely to provide some comic relief and that's a welcome thing.  If they just focused on the main characters, this movie would sink like Shelley Winters on the SS Poseidon.

There's a LOT of borrowing from the Jaws series, though, and, while they did try to give us some character development, there were very few characters I cared about and what development they gave us just wasn't enough in most cases.  Some of the dialogue felt off, but that could be because it's an Australian film so I'm giving it the benefit of the doubt.

My other big beef is the special effects.  They did a nice mix of practical and CGI but the CGI they used was REALLY obvious.  Yeah, I know.  Indie film.  Whatever.  They know better.

All in all, though, it's a decent popcorn flick.  Don't expect too much out of it and it's a fun watch.

I'm still not going anywhere near murky water.
Posted by BobSmash at 12:53 PM