Picture it.  1996.  The DVD player is introduced to the world.  The Mars Rover is launched.  Dolly the sheep is cloned.  The Spice Girls are tearing up the airwaves... as much as English teen sensations hyper-publicized girl groups can, anyway.  Tickle-Me Elmo is causing mothers to devolve into ape-like creatures that will tear the arm off of anyone that gets between them and their child's dream-toy.  Wiccans are highly underrepresented in the media and Fairuza Balk is bored shitless.

Thus is born a cult classic. 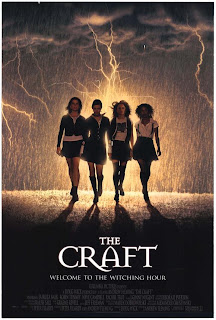 Sarah Bailey has issues.  Like, not just a few issues.  Like an entire newsstand worth of issues.  Apparently these issues were enough to make her family move to LA.  LA is the answer to everyone's problems, for realsies.  Smog has an inhibiting factor on teenage mental illness.  Or so I've been told.  I think I may have been lied to.  She gets accosted in the new house by a homeless dude.


So she gets to her new school and befriends the outcasts.  Because that's what troubled teens do, y'see.  Bonnie (Neve Campbell), Nancy (Fairuza Balk) and Rochelle (Rachel True) all have their own issues.  Bonnie is covered in burn scars, Nancy comes from po' white trash and Rochelle... ummm...  well...  she black.  There's really no way to sugar-coat that.  They discover that Sarah has magical powers and stuff when she levitates a pencil in class and they think to themselves, "Hmm.  She seems to be of a supernatural nature.  Let's get her to be part of our coven and she can help us do some really cool shit.  Praise Manon."

To emphasize this, the homeless dude from the beginning of the movie shoves a snake in Sarah's face and then immediately gets hit by a car.  Nancy and the others firmly believe that they made that happen.  This does not bode well.

So, anyway, Sarah really likes this guy Chris (Skeet Ulrich) because he's SO Johnny Depp-like and popular and junk.

But when he decides to spread a rumor that they had sex after one date, Sarah is rightfully pissed but also a little stalker-y (issues) so she casts a love spell on him at a slumber party (where they learn to cast glamors that change their hair color and play "light as a feather, stiff as a board" which never actually works because I've tried it) and he becomes a loyal puppy dog.

At the same time, Rachel makes her racist bitch tormentor's hair fall out.

Bonnie wishes for beauty and her scars peel off like a healed sunburn.

And Nancy wishes for power.  She gets this in the form of magic with no immediate results.  Well, at least not until she causes her step-father to have a heart attack.

Naturally, Nancy has tasted blood and wants more so she says "Hey!  Let's go down to the beach and do this ritual to appease Manon who's this god that nobody's ever really heard of but he's totally awesome and we'll be real witches and shit."  So they do and Nancy gets a face full of lightning.  Obviously, this is going to have negative consequences.  This is probably best indicated by the fact that she hugs a dead shark the next morning.  Eew.

So, yeah.  After that, Bonnie becomes totally enamored with herself and gets kinda Hey-Boys-Look-At-Me-licious.  Chris tries to rape Sarah and Nancy kills him by tossing him out a window at a party (while glamored to look like Sarah).


Rachel... well, Rachel gets to watch a white girl crying.  Rachel is kind of useless.  I mean she's pretty and funny and I'd like to see Rachel True in more things but they really didn't play up that whole Malcolm X thing that they could have had a BALL with.


ANYWAY!  Nancy's totally out of control so Sarah tries to cast a binding spell (with the help of Assumpta Serna (the lady who runs the occult shop) on Nancy but it doesn't work and the coven turns on Sarah.  Like turns as in "tries to drive her crazy again with snakes and bugs so she'll commit suicide".  Nancy, of course, can't wait, so she cuts Sarah's wrists herself.  Of course, this does nothing but make Sarah angry so she freaks out Bonnie and Rochelle and finally binds Nancy so she can't do anymore harmful magic.  Because Sarah is a good witch, she just makes sure that Nancy ends up in Der Boobyhatch.

This is one of those movies that's ultimately brainless and is pretty much destined to offend any Wiccan teenager that comes across it.  "Wicca doesn't work like that and I should know because I come from fifty generations of Wiccans even though Wicca, as a religion, has only existed for about 50 years but you should listen to me because I'm just a couple of razor blades away from an official cry for attention."

In any case, I'm FAIRLY certain that Fairuza Balk, an actual Pagan who ran her own occult store for a while, wouldn't have signed on if she thought it was going to represent Wicca unfairly.

So, yeah.  This is one of those love it or hate it movies.  Personally, I love it.  It's campy fun.  It has some laughable special effects (Girl... that hair...) and it seems a little preachy but seeing as how the preachy is coming from Nancy it's not to be taken seriously.  Plus, Fairuza Balk is a hoot and a half to watch and I've been a fan of her since Return to Oz (which, by the way, is pretty much a horror movie).  She's DELICIOUSLY over-the-top.

One thing that I adore about it, though, is that it doesn't rely on conventional tropes.  The Craft covers a lot of territory but it does so in a wholly original manner and I find that refreshing.

The Craft BEGS for a movie night with friends.  You should bring wigs to braid (unless your friends are actually girls) and nail polish and try to do that light as a feather thing to see if you can actually make it work.
Posted by BobSmash at 11:26 AM