OK, so, today I'm gonna review something horror-adjacent rather than flat out horror.  Because it's my blog and I said so.  Nyaah.

Anyway, today, we're gonna head to Fallwell, Massachusetts with Elvira, Mistress of the Dark.  Such a quaint, little hellhole. 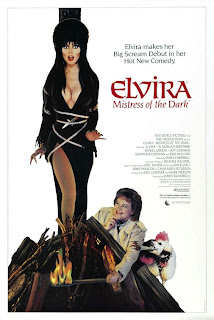 So, Elvira gets fed up at her job at a local station because the new owner is a lecherous bastard who was told she was a nympho and said so on the air after she shoves him through the nightly news set.  She feels vindicated in this because she has her act in Vegas coming up.  An act for which she has to come up with 50 grand.  Oops.

It turns out, though, in an astounding act of cinematic luck, that her great-aunt Morgana Talbot has mentioned her in her will.  Elvira's fantasies tend toward The Price is Right so she gleefully jumps in her car and heads East to Fallwell, home of Edie McClurg, the Legion of Decency and Tic-Tac pie.  Of course, her boobs cause more problems then they're worth.  A couple of would-be rapists, beer in crotches, a bar fight, a confrontation with the local tits...  all in a day's work.

On the good side... kinda... she inherits Aunt Morgana's house, poodle and recipe book.  On the downside, her uncle Vincent wants the book for reasons unknown ad he's kinda pissy about it.  On the upside, again, she nicknames the poodle Gonk and punks it out. 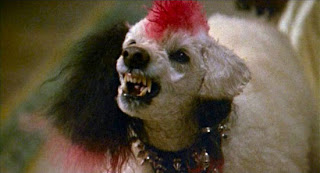 Possibly the only reason I'd ever own a poodle.

On the downside, Vincent REALLY wants the book.  Gonk hides it.

Elvira then gets to spend the night in the old house (after scaring the crap out of the local teenage peeping toms) and has fucked up dreams that kinda-sorta explain her past. 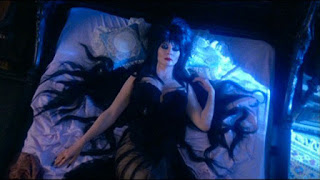 And this... which is a far cry from her ACTUAL sleeping attire. 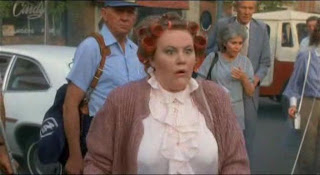 So, in a minor scene, Elvira kicks a lecherous real estate agent out of her house and gets all despondent.  She meets up with her bowling alley rescuer, Bob, at his G-Rated theater and this happens:

And then she gets the great idea to hold a horror marathon at the theater.  It's gonna be AWESOME.

She gets tarred and feathered in a Flashdance-esque number guaranteed to get a "standing ovulation".  For realsies.

Anyway, eventually Vincent gets the book and she gets to run for her life.  Making things like this happen.

Then they try to burn her at the stake.

ANYWAY!  This movie is just about the ultimate in cheesy horror comedy and I LOVE IT!  I saw this 5 times in the theater in 1988.  Elvira is a cultural icon and I think she needs to stay that way.  Neither she nor this movie have any redeeming social value but I don't fucking care.  This is hilarity-on-a-stick!  Cheesy, Henny Youngman-like hilarity but the classics never go out of style.

Plus this has everything the straight boys want.

Say it with me now, kids.