Well, it seems I've given myself another themed week because we're covering another basically intentional horror-comedy.  Today, we're gonna be uncovering the secrets behind the gross national product of Bolivia and the international standard for the measurement of trunk space. 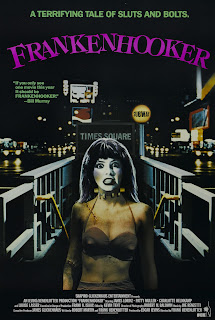 So, yeah, the story is simple.  Jeffrey Franken (seriously?), who still lives with his mom, loses his gorgeous girlfriend in a freak lawnmower accident that basically turns her into sliced ham.  Because he's all science-y, he decides he's going to put her back together.  Because his shed is CRAMMED full of Con-Ed tech and he's got nothing better to do.

Unfortunately, there aren't enough parts left of her so he has to get... creative.  Being that he's a Jersey boy and it's 1985, he hunts down bits and bobs in Times Square.  He comes across a whole bevy of herpetic-sore ridden beauties by way of the pimp, Zorro. 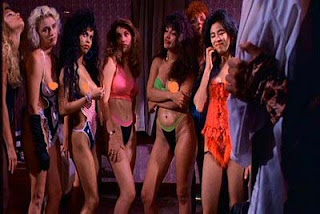 Since he can't bring himself to just stab them, he offers them his own, home-brewed version of super-crack and they all explode.  No, really.  Boobs everywhere.  He apologizes, of course. 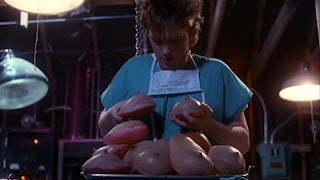 This is the "NSFW" thing I was talking about.

In the midst of his science-ish doings, there's his mom, played by Louise Lasser who's all "You want a sandwich?"  It's not important but she's funny. 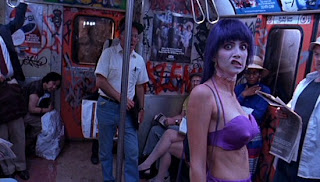 If you don't stop, your face will stick like that.

Suffice it to say that this movie is 100% WRONG.  And I heart it.  Frank Henenlotter is seriously underrated in terms of horrible comedies because this is some funny, funny shit.  This is a movie I use to introduce people to the joys of awful cinema.  There's absolutely NO redeeming social value, the acting, except maybe on the part of Louise Lasser and Patty Mullen, is COMPLETELY horrendous and utterly giggle-worthy and the script... well, there really was no script.

This is one of those T&A nightmares that cropped up in abundance in the 80s and it made the home video market totally worth it.  The interactive packaging that shouted "WANNA DATE?" when you pressed the right spot made this movie a whole lot more popular than it needed to be and I think that's awesome.

And, seriously?  Any film recommended by Bill Murray is OK with me. 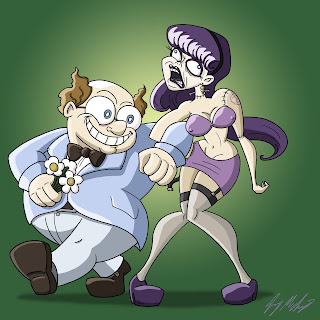 Credit to the artist... I know not who that is.

Hey, Hollywood?  Where's my big-budget, darker and edgier remake?
Posted by BobSmash at 11:12 AM