Ah, youth.  We wasted it when we had it, we long for it now that it's gone and we'll do ANYTHING to reclaim it.

In case you haven't guessed, we're gonna visit Lisle Von Rhoman and a few members of her VERY select group of friends. 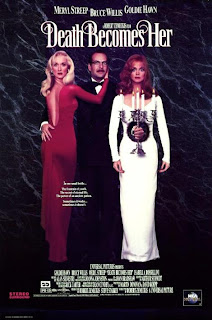 The film begins with Helen Sharp (Goldie Hawn) and Ernest Menville (Bruce Willis), an engaged couple attending Helen's friend Madeline Ashton's (Meryl Streep) musical, Songbird, a REALLY bad version of Tennessee Williams' Sweet Bird of Youth.  After a brief meeting backstage, Ernest, despite his promise, leaves Helen for Madeline which, of course, drives Hel into a spiral of junk food and madness.  Madness that lands her in the loony bin   An obsession that even Olivia from Sesame Street can't crack until she has a breakthrough on her own. 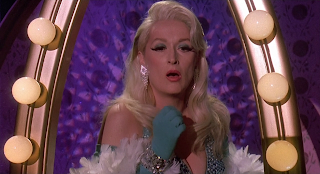 Seven years later, it's extra-obvious that Mad and Ernest have, well, an obvious Hollywood marriage.  Mad's career is on the wane and she's bitter.  Ernest is a "tragic, booooooozy, flaccid clown" who's been downgraded from "plastic surgeon to the stars" to "undertaker to the stars".  They legitimately hate each other but they keep up appearances.  Out of the blue, Mad receives an invitation to a book signing by, you guessed it, Hel.

Mad, of course, rushes to the spa where she is refused a plasma separation treatment because she had one three weeks ago.  Mad gets pissy about the aesthetician's 22-year-old skin and her tits like rocks and the manager steps in.  He gives Mad a card for someone who he believes can help.  A Ms. Lisle Von Rhoman.  Of course, Mad is unbelieving.

So, they attend the party, of course and there's Hel.  Looking STUNNING and slinking her way through the crowd like a greased weasel.  And because Hel is still insane, she plays Ernest and Mad off of each other like a harp from... well... Hell.

Of course, this drives Mad to visit her boy toy who is in the process of schtupping another woman.  He inadvertently... and then deliberately... makes her feel cheap and old which, along with an appropriately timed rainstorm that soaks her to the bone, sends her straight to Lisle (who's played DELICIOUSLY by Isabella Rosselini) looking like a drowned rat. 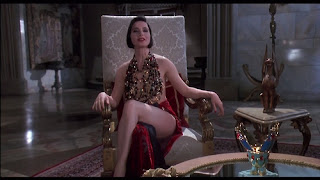 There, Lisle sells Mad a little potion.  One that will keep her young, FOREVER, and tells her that after ten more years of fame and fortune, Mad has to disappear from the world.  Mad is OK with this.  She also adds on the fact that Mad only gets one body so she should take care of it.

In the meantime, Hel shows up at Mad and Ernest's house and helps Ernest to plot Mad's murder.  Because they're in California and divorce is just unthinkable.  And because she's now a murderous sexpot, Ernest buys right into it.

After witnessing her own transformation and declaring that she is, in fact, a girl... since the ownership of a vagina didn't clarify that enough (although I'm assuming she's referring to age, not physiology)... Mad goes home to change out of her sopping clothing and is confronted by Ernest who, after a heated exchange, pushes Mad down the stairs. 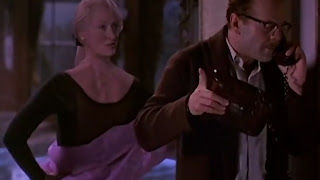 Of course, since Mad's not dead, Ernest takes her to the hospital where they find out that she actually IS dead.  And so is the doctor who examines her.  Ernest rescues her from the morgue and takes her home to repair her.  He just finishes when Hel shows up prepared to bury her.  Mad overhears the plot, since Hel isn't exactly being quiet about it, and Mad blasts her in the guts with a double-barrel. 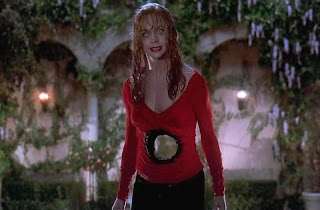 There is a HOLE in my STOMACH!

After a shovel fight, the girls realize that they both took the potion and reconcile.  Mostly because Ernest is the best reconstructive mortician money can buy.  They convince him to fix up Hel as well on the condition that they allow Ernest to leave without another word.  They agree. 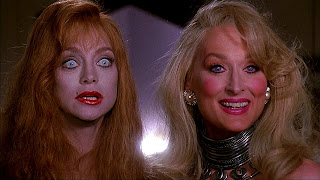 Of course, it's never that simple.  They realize that they can't do what Ernest does so they take him to Lisle. 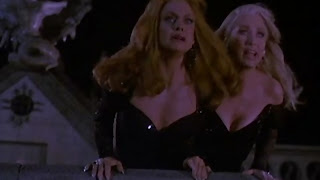 That said, we all know that this movie got mediocre reviews but it DID win the Oscar™ for visual effects and Meryl Streep got a Golden Globe nomination for playing Madeline so obviously somebody did something right.  Frankly, I ADORE this movie.  It's eminently quotable, the camp factor is through the roof and it's delectably dark.  Even the significance of the names was well thought. 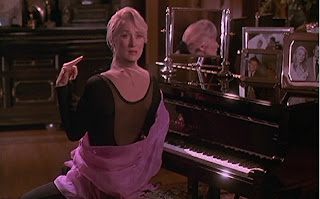 I can see my ASS!

Not just the first names.  Mad and Hel is easy.  Ashton and Sharp also indicate mayhem and burning ruins.  Ernest is just trying to live his life and the girls are seriously trying his ability to be earnest.

This tasty, tasty tale of frienemies is a true classic.  I feel bad for all of those critics that didn't see it the first time around.  These immature and emotionally ugly women deserve what they get and they get to live through it so we get to watch the wheel of karma LITERALLY kick them in the ass at every turn.  Delightful.

I can't WAIT for this to be remastered to Blu-Ray.  The DVD release kinda sucked.  We're pretty sure that's because it was made from the laserdisc and THAT was an awful piece of technology.