Children of the Night... Shut Up!

1979.  The midst of the Cold War.  Communism is rampant in Eastern Europe.  Nadia Comaneci is a gymnastic media darling and Slavic aristocrats are exceedingly unpopular.

Guess who's a Slavic aristocrat? 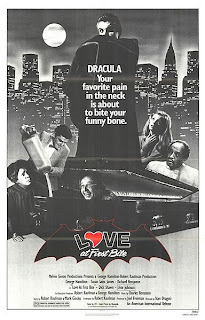 Yes, kids, Dracula gets upgraded to the Disco era in Stan Dragoti's Love at First Bite with the help of George Hamilton, Arte Johnson, Susan Saint James and Richard Benjamin.


Count Dracula and his resident bug-eater, Renfield, are evicted from his castle by the local Communist regime so they can use it as a gymnastics training center.  Because he happens to be infatuated with a certain flake of a model (a supposed reincarnation of a former love and fuck you, Francis Ford Coppola for this blatant theft), he reluctantly moves to New York City to find her. 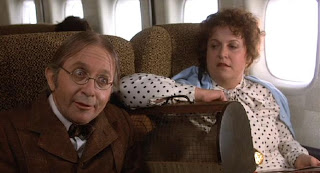 Because Renfield is an idiot (and that whole "day star" thing) not only does the Count have to fly in the baggage compartment but he's been provided inappropriate reference materials to cope with life in the big city AND once they get off the plane, there's a coffin SNAFU and Dracula wakes up at someone else's funeral. 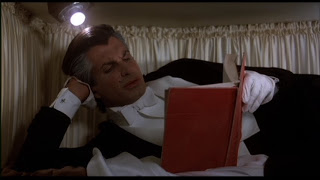 So, after a few mishaps including, but not limited to, trying to get a taxi, going to get food but getting chased out of the room by an angry divorcee, being mistaken for a "black chicken" and eating a drunk thereby giving him a hangover he manages to hook up with Cindy Sondheim, the aforementioned flake.  The woman finds her cat in the refrigerator for cryin' out loud!  What the hell, man? 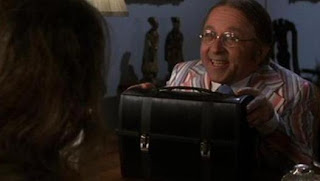 With the help of Renfield who finally does something right.

So, anyway, Cindy tells her shrink and kinda-sorta boyfriend, Jeffrey Rosenberg (who happens to be the grandson of Fritz van Helsing... he changed it to Rosenberg for "professional reasons") who spends the rest of the movie chasing after Dracula.  At a dinner date (and who brings their fucking shrink on a date?), Rosenberg tries out all of the standard tricks.  Mirrors.  Garlic.  Hypnosis.  The Star of David... wait... what?

Rosenberg is an idiot.  He goes to the police and tries to get a lieutenant to believe him.  Which is completely fucking ludicrous. 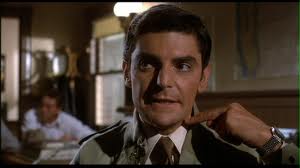 This is the international sign for "vampire".
Or "lawyer".
Language is awesome.

Then he breaks into Dracula's room and tries to set his coffin on fire but he gets hustled out by security.  Then he uses a couple of silver bullets but, for real, man?  Those only work on werewolves.  Of course, all of this crap lands Rosenberg in the booby-hatch but the lieutenant comes around after a series of blood-bank robberies and vampiric attacks surge across the city and he gets released. 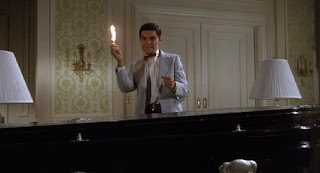 The things we do for love...
His search continues but, in the end, Cindy decides to go with Dracula... to Jamaica... since the coffin was shipped there by mistake.  Rosenberg finally gets paid AND he gets to keep Dracula's cape so it's a win-win for everybody.

Love at First Bite is one of the few vampire comedies to do it right.  It had enough farce to be absolutely hilarious but was serious enough that the humor wasn't "all slapstick all the time".  I remember seeing this in the drive-in (and if that doesn't tell you how old I am, I'm not sure what will) and I laughed my prepubescent head off!  Even then, I was fully aware of the irony of George Hamilton, sun-worshipper extraordinaire, playing a vampire.  And I've ALWAYS loved Arte Johnson.  He played Renfield to PERFECTION.  He was my favorite part of the movie.

And the best thing was that this was Hamilton's first comedy.  The man has a talent that had been, up until that time, completely untapped.  The studios should have been slapped for letting that pass by.

This movie made $43 million in 1979 making it a bona fide blockbuster and it deserved it.  I miss this kind of film making.  Yeah, the movie is dated, now, particularly since the Disney-fication of Times Square, but this kind of nostalgia is priceless.

You young-uns need to check this shit out.
Posted by BobSmash at 10:50 AM