This Is My Art and It Is Dangerous!

In 1988, I became a Tim Burton fan for realsies.  I mean I LOVED Pee-Wee's Big Adventure but that little black pit where my soul used to be wanted something a little... darker.  Tim delivered this in spades with his classic family-friendly horror-comedy Beetlejuice.

And yes, I know I was covering horror-comedies last week but I must've watched this movie a million times as a teenager.  It gave me an appreciation for Harry Belafonte and I could just about quote, verbatim, every word out of Delia Deetz' mouth.

LET ME HAVE THIS! 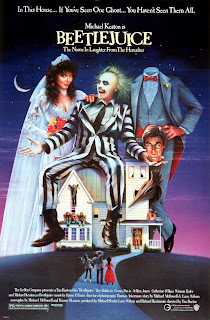 Adam and Barbara Maitland (Alec Baldwin and Geena Davis) are taking a stay-cation to fix up their quaint, lovely, idyllic New England home.  They take a trip into town after fending off the local real estate agent who's trying to sell their house against their wishes because the stupid bitch can't mind her own damn business.

After completing their errands, they head back and, in the process of trying to avoid hitting a little doggie in the road, run themselves off a bridge.  They make their way back home, sopping wet and icy cold and try to warm themselves at the fire.  A fire they did not light, by the way. 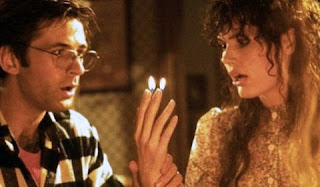 Well, that's a good way to wreck a manicure.

So, yeah.  Turns out they're dead and they get to haunt their house.  YAY!  Only, you know, not.  Because this isn't a "the house stays deserted and slowly decays making it look delightfully spooky" haunting.  This is a "irritating folks from New York buy the house and turn it into an art gallery nightmare".  The Deetz's have purchased the house from the meddling bitch real estate agent and Delia (Catherine O'Hara) has decided that "If you don't let me gut out this house and make it my own, I will go insane and I will take you with me!" Charles (Jeffrey Jones) is perfectly happy with the house as it is but Delia is all artsy and bad at it.  She and her interior designer, Otho (Glenn Shadix) proceed with the gutting and turn the place into a horrific modern art piece.  Lydia Deetz (Winona Ryder, goth girl template and mistress of moping) is the only person that can see the Maitlands and spends some time trying to convince everyone that the house is haunted.

While all of this is going on, Adam and Barbara discover the extra dimension (called Saturn) outside the back door, tear off their faces and cut off their heads trying to scare the Deetz' out of the house.  None of this works because, according the The Handbook for the Recently Deceased, the living won't normally see the dead.  They eventually end up in the netherworld where they find out that they have to haunt the house for 125 years and they only get 3 interventions with their case worker Juno (Sylvia Sydney).  She firmly tells them that if they want the Deetz' out, they have to frighten them out themselves. 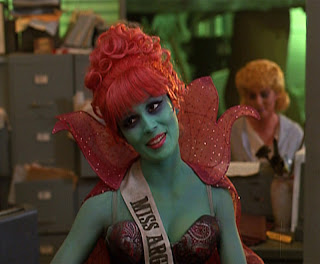 If I had known then what I know now, I wouldn't have had my little accident.

After a really cheesy attempt at scaring the Deetz', they meet up with Lydia who informs them that they won't scare Delia because she's sleeping with Prince Valium and that her dad never walks away from equity.  She tries to help them, anyway.  Afterwards, since they're desperate, they find the flyer and a little flashing light in their model of the town.  They figure, hey, what's it gonna hurt and summon Betegeuse (Michael Keaton and do I HAVE to tell you how to pronounce that?), a "bio-exorcist" by saying his name three times.  He's the netherworld's version of a sleazy used car salesman.  He's lecherous, disgusting and disrespectful.  We heart him.

After meeting him, though, Barbara comes up with a plan.

EEEE!  I love this plan. 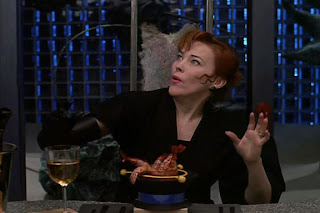 Because of the charm of the neighborhood and now that they've seen proof of the ghosts, Charles wants to turn the town into a paranormal amusement park.  After being rebuffed by Delia's agent, they invade the attic trying to find the Maitlands.  They couldn't find them but Beetlejuice takes matters into his own hands at this point and scares the pants off of Otho and the Deetz'. 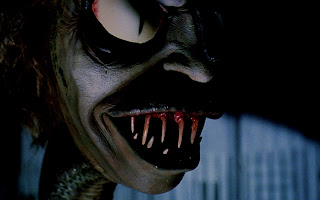 We've come for your daughter, Chuck.

Otho manages to snag the Handbook and offers to run a seance using the book and the Maitlands' wedding clothes which Beetlejuice promptly co-opts in order to get his creepy, pedo hands on Lydia.  See, if she marries him, he can stay in the land of the living. 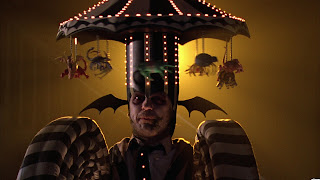 Come on a little closerrrrr!

Oh, my gawd, oh, my gawd, oh my gawd!  This is one of the best movies, EVER!  Tim Burton's style is EXTREMELY evident in this one and it plays to the perky goth in all of us.  For a movie with such morbid subject matter, there's life and light and a cheerfulness to this movie that's totally unexpected.  Too bad this didn't extend to any of his other films besides Frankenweenie and The Corpse Bride.  (Nightmare Before Christmas doesn't count.  Burton PRODUCED it.  He didn't direct.)

Seriously, Burton.  I know you don't want to be a one-trick pony, but we all know you are.  Stop putting Johnny Depp and Helena Bonham-Carter in shit and go back to why we love you.  Scratchy, curvy lines, black and white, creepy-cute goth girls and that delightful sense of otherness that makes your movies a joy to watch. 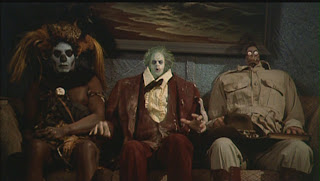 Plus, this movie (barring a few choice words and themes) is a GREAT way to spend a few hours with the family.  There's nothing TOO scary about it and the humor is mostly kid-friendly.  Older kids, anyway.

Beetlejuice is a gateway drug and I LOVE IT!
Posted by BobSmash at 11:41 AM