Manga Man Says: NOT FOR KIDS!

Today, kids, we're going to step away from standard horror for a moment and look at, as mentioned previously, the horror adjacent.

For today, and, seriously, all this week, we're looking at Anime and it's expressions of horror, from the relatively tame and often hilarious Soul Eater to the completely balls-out fuck-nutty Higurashi No Naku Koro Ni.  The Asian people have a totally different and utterly beautiful way of expressing their societal fears and people may scoff at Anime but some of the most twisted and nightmare-inducing shit has come my way via Funimation. 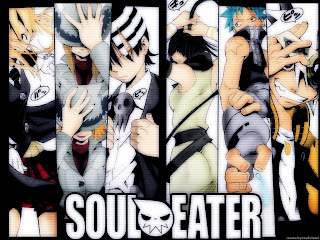 I started watching this on Toonami a few months ago and it became a favorite REAL fast.

The premise goes like this.  Soul Eater follows a group of students at the DWMA (Death Weapon Meister Academy).  The students are split into teams, a "weapon" and a "meister".  Weapons are people that have the ability to actually turn into physical weapos and they maintain a psychic link with their meister.  The weapons' collective goal is to become a "Death Scythe" or a weapon specifically used by Death himself.  The meisters' job is to defeat evil people so that the weapons can eat the evil souls (and the soul of one witch) in order to complete this task.

So, yeah.  The primary team we're following is Maka and Soul.  He's a scythe and she's pretty much Hermione Granger.  Like Hermione, she will WHUP your FUCKIN' ASS if you cross her.  She looks meek and mild but she's got power and she's not afraid to use it.  On the outside, we've got Black*Star and Tsubaki (he's a smug fucking jerk-face and she's even meeker than Maka but has the ability to change into multiple weapon types) and Death the Kid, Liz and Patty (He's Lord Death's son and the girls can change into a pair of pistols (or larger, more dangerous weapons if the situation calls for it and he's got enough "soul resonance" to do it).

Anyway, at the academy, they are learning how to be the best teams they can be and what they're actually fighting against.  Their instructors include a zombie, Maka's deadbeat dad and Dr. Franken Stein.  Yes.  That actually happened.


It seems that the witches are the major source of antagonism and one of them has a plot to resurrect what's called a Kishin, an extra-naughty person with horrible mind-bending powers. 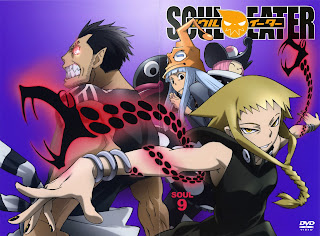 And that's all I'm telling you.  Frankly, as far as I'm concerned, this series kicks and everyone should be watching it.  I'm counting this one as horror-adjacent because it contains horror elements like interpretations of some of the classic movie monsters.  Even though it is not true horror, I think that horror fans would enjoy the bits used for flavoring.  Don't get me wrong, there are some horrifying elements to it (children are NOT safe) but for the most part it's action with a hint of comedy.

All four seasons are on Netflix streaming and it's kind of an awesome way to spend the weekend if you don't feel like getting off the couch.