Anime Week: What a Dick! (NSFW)

So, yeah.  We're gonna bring out the big guns (HA!  Guns.)  today and talk about Urotsukidoji: Legend of the Overfiend. 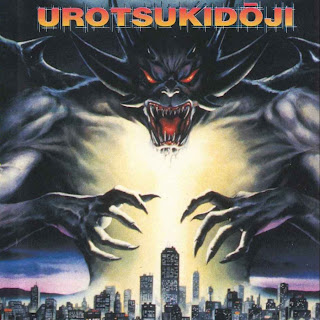 The story (if you can call it that) goes like this:

There are three worlds, the normal world (人間界 Ningenkai), the demon world (魔界 Makai) and the beast world (獣人界 Jūjinkai).  Every 3000 years they decide to get up and party like it's 1999 and all kinds of shit goes down.  Most importantly, the appearance of the Overfiend, whose job it is to completely fuck up the planet and erase all life so the whole fuckin' thing can start over.  Which is fuckin' weird because Japanese culture has been around for about 17000 years.


Anyway, basically there are 5 movies and 3 OVAs (Original Video Animation) that tell a huge, convoluted story about how a Man-Beast named Jyaku is trying to find the true Overfiend and ensure the safety of all three worlds.  In the meantime, there's this kid named Tetsuo that's destined to be the host body for the Overfiend, the tart pictured above, Akemi, who is portrayed much more innocently in the film than the manga, Yuichi, a nerd who replaces his dick with a demon's and gets into all kinds of trouble with THAT and a whole bunch of other characters that just confuse the fuck out of me.

Now, this is obviously supernatural horror because we're dealing with demons and people cutting off body parts and replacing them with demon wangs and teachers that are part lizard demon and people dying all willy-nilly and shit.

On the other side of the coin, we most definitely have eroticism because the Japanese most certainly like their schoolgirls all tied up and stuffed full of stuff in the tender places.