One of the most critically acclaimed Anime of all time, Ninja Scroll is, frankly, both completely badass and creepy as fuck. 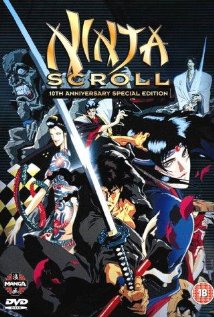 And for a movie that's about 20 years old, it holds up really well.

Taking place in feudal Japan, Ninja Scroll follows Jubei, a wandering warrior who said "Fuck this" to his membership in a team of highly skilled ninjas who were retained to protect a gold mine and bugs out.  The movie (which is billed as an action/thriller) lets us know that Jubei actually killed the leader of his team, Gemma.

Gemma, on the other hand, apparently disagreed with having his fucking head removed and decided to resurrect himself and gets together with a new team called the Devils of Kimon who, in turn, are led by Tokugawa shogunate and they kind of just hate everybody.  They're made up of some truly freaky folks.

During his bout of, seriously, just trying to mind his own fuckin' business, he manages to get poisoned by this chick:

Her tattoos do this:

The antidote involves sleeping with this person:

Plus there's this chick:

Anyway, I'm not telling you any more.  This is one of those movies you have to see.  I love it, though.  It's spooky and action-packed and it's just fuckin' beautiful.  Plus, it brings us straight into Japanese mythology.  It's just an all around gorgeous example of storytelling.

Seek this one out.  It continues as a series.
Posted by BobSmash at 7:40 PM