Instead of covering a movie, today, we're going to talk about an anime series and, for serious, this is probably the creepiest anime series in existence besides Bobobo Bo Bobobo. 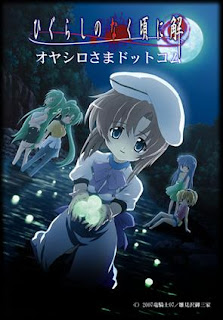 Higurashi No Naku Koro Ni (literal translation: When the Cicadas Cry.  Known in America as "When They Cry".) is a murder mystery/dating sim adaptation/horror series set in a small town in rural Japan.  Over the course of 26 episodes, it follows Keiichi when he moves to Hinamizawa and makes friends with Rena, Mion, Rika and Satoko.

So, yeah, anyway, they all have an afterschool club where they play games and the loser gets a punishment.  Because kids do that, right?  During the annual Watanagashi Festival, though (and what did I tell you about festivals?) things go tits up.  Every year for the past four years, someone goes missing and another is murdered during this festival.

During each story arc, someone gets paranoid and antsy and commits a crime, usually among the friends.

Now, during the course of the series, there are four different mysteries, four different crimes, four different examinations of the festival and its goings on and four different dead girls.  It's kind of ballsy how they did that, really.  The series gives up some COMPLETELY creepy shit, too.  Like the one situation wherein a character is kidnapped and held prisoner and, rather than suffer whatever punishment at the hands of her attacker, takes a knife, holds it handle first against the wall and headbutts herself to death on it.

This series is a slow burn and SERIOUSLY fucked up but I say sit through it and give it a chance to sink in.  I guarantee you you'll not want to sleep for at least a week and you'll avoid your local craft fair like the plague. 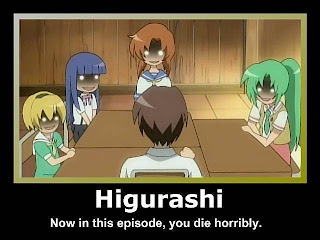