So, this weekend I got a little downtime, finally, and decided to try and play catch-up with Netflix which is a fucking daunting task, let me tell you.

Anyway, during that process I came across a title with Brad Dourif that I'd not seen before called "Last Kind Words" and I settled in to watch because my husband was taking a nap and I figured I shouldn't watch anything with a lot of screaming. 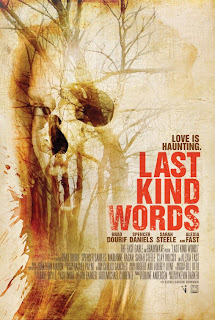 Suffice it to say I didn't expect much.

The film starts, like all good films should, with a kid shooting his father.  Totally accidental, of course, but you know how these things go.  Kid gets separated from his father during a hunting trip, kid finds corpse hanging from a tree that, seeing as how it was from the civil war, should have tumbled to the ground DECADES ago.  Kid goes to cut it down and a magical negro (turns out he was an escaping slave on the Underground Railroad) appears to stop him.  Kid gets spooked and tries to shoot the magical dude but magical dude is a ghost so he really shoots his dad.  Right in the heart, too.  No comin' back from that one.  Kid returns to the farm to report to his sister.

So, here we are, years later, and a family pulls up to the farm and the father has apparently been hired by Weyland (Brad Dourif) to do, well, farm stuff.  Farm stuff that I will never understand because I don't like physical labor.  This is why I sit at a desk and talk to silly people who break their computers all day and write this blog for you.  I don't even like camping because it smacks of work.  Who wants to build their own shelter and sit around a fire with mosquitoes sucking out your life force one milliliter at a time?  Seriously.

So, while dad hammers out the details (such as "you get to live in the trailer in the back yard"), the kid, Eli, goes tromping around the back yard because he's a sullen, moody boy who hates being there as much as any young man, who has basically been grounded for life simply by dint of moving to a backwater farm in the middle of nowhere, would be.  Hell, I'd be pissed, myself.

He picks up an apple and goes to take a bit when a young woman comes out of the woods and tells him not to eat it because it's full of bugs.  Good call.  Too bad his dad comes back and gets all cranky-pants about a fuckin' apple.

Eli makes friends with this girl who has given him no more information than her name, Amanda, and her location, "around".  Because he's a teenage boy and can get off on a handy ball of twine, he gets all twitterpated and a budding romance emerges.  We all know this won't end pretty, right?

On top of all of this we've got his dad who, naturally, is an abusive drunk and his mom who, seriously, is the Clueless Wonder.  Not quite an example of battered woman syndrome, because she's still got some fight in her, but enough to make her annoying.

So, yeah.  Long story short, kid falls in love with the girl, girl is a ghost, ghost happens to be Weyland's sister.  Weyland is a possessive creeper.  Girl USED to be the love of kid's DAD'S life and dad's a-pinin' because his life's gone to shit ever since he lost her thinking she ran away on him.  Weyland hung her in the backwoods which is where the majority of this story takes place because filming in the woods is cheap.  Oh, look.  A pre-fabricated set.

Somewhere along the way, dad and Weyland get in a fight and dad ends up dead.  And that's when the creeper in Weyland REALLY comes out.

Oh, and we've got a minor sub-plot with Eli's pseudo-ex-girlfriend that either needed to be amped up or left out completely.

Now, the ending to this is relatively predictable but I'm still not going to go any further.  You know me and spoilers.

So, let's talk about this for a bit, shall we?

This is almost a textbook example of the Southern Gothic genre.  We've got love and hate and abuse and incest and a big rotting "mansion" in the deep south.  We've got people who are resentful of "city folk" and a blatant connection to the Civil War.  There's intrigue, there's, for lack of a better word, passion.  About the only thing we're missing is the crazy grandma in the attic.

All of that being said, I didn't hate this movie but I didn't like it, either.  This is probably because I don't have a single romantic bone in my body.  Actually, that's a lie but I'm not big on the gooey-mushy stuff in my horror movies (fuck you, Stephenie Meyer).  I know it has it's place and I know that romance is a large part of ghost movies, particularly in the case of Southern Gothic films, but there comes a point where the romance overcomes the creepy and this movie crossed that line.  It wasn't a feel-good movie by any stretch but it wasn't dark enough to overcome the lovey-dovey.

I can't say it was a bad movie, though, either.  Yeah, it was shoestring and, yes, there are scenes that feel forced and over-acted but it wasn't bad from a film-making standpoint for a B-Grade plotline, either.  I also give it props for sticking with the downer ending.

I give this one a thumb's sideways because I can't really make up my mind as to whether or not I hate it.  This is definitely a case of "Your Mileage May Vary".
Posted by BobSmash at 1:01 PM