Maybe I'm just dating myself but this new crop of directors is really hit or miss for me and I may be the only one in the room tat feels this way but I'm thoroughly fucking tired of half-ass directors putting out less than half-ass product and expecting a horror audience to just fucking show up.

Also, I kind of hate "home invasion" movies.  The best of the lot is The Strangers and that was insanely brilliant.  Everything else is just a pale comparison and that brings us to today's review. 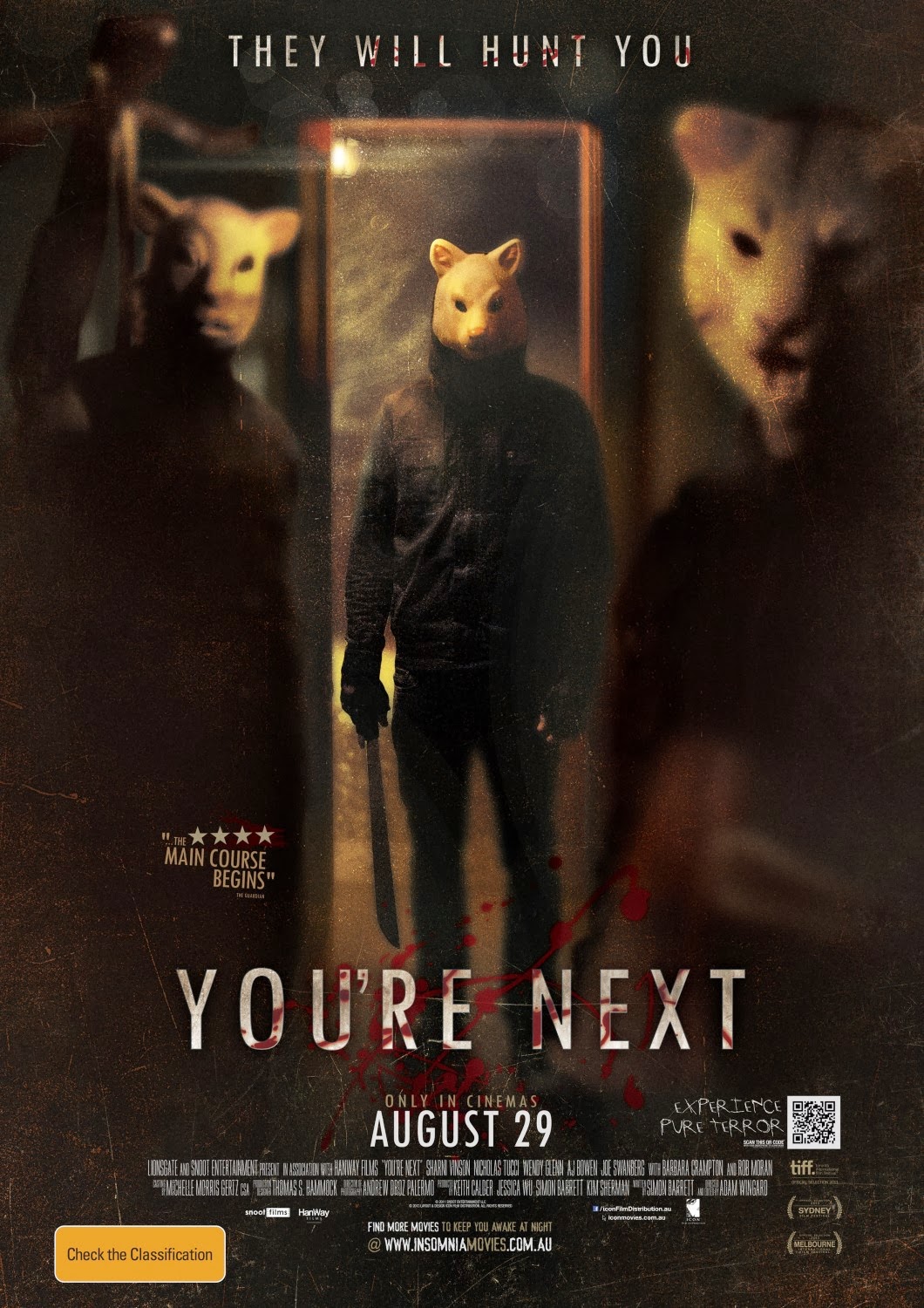 You're Next is the tale of a pack of animals getting hunted down by the Terrible Trio from Batman.  Because nothing gets me wetter than a bunch of guys in masks hunting The Most Dangerous Game for no fucking reason leaving DNA evidence everywhere and basically itching to get caught.  It makes me want to cry, it really does.  Once again, The Strangers was awesome.  Nothing else can ever compare to it.  You're Next is a shitshow of bad acting and a lot of unnecessary screaming.

Oh, wait.  They DO have a reason and it's kind of stupid.

But, hey, they use crossbows and tripwires at neck height so that makes it awesome, right?  Ummm... no.

I don't care about these people.  I don't care who lives or dies.  I just want this to stop and stop quickly but it doesn't.  It just goes on and on because there's, like, 14 fucking victims and they're all fucking stupid.


Hmmm... let me count the way these assholes are stupid.

They arrange a family reunion when they all obviously hate each other.

They can't CRAWL past a goddamn window?

They don't actually BARRICADE anything?

The asshole who tries to remove a crossbow bolt from his own back because A) that's not really possible without breaking the fucker off in there and B) The LAST thing you want to do with a stab or puncture wound is remove the foreign object without medical assistance.  Doesn't Wingard watch E.R.?

The MULTITUDE of times they try to get to the neighbors.

One of the killers actually aims an axe at his own foot.

The actual suggestion that someone go to the cellar to check the fusebox alone followed by the instant "I'll be right back".

Fuck, Wingard, you can at LEAST try to play around with the tropes instead of playing them straight.

Why people think this is the best damn horror movie in ever is completely fucking beyond me.

Email ThisBlogThis!Share to TwitterShare to FacebookShare to Pinterest
Labels: horror, just plain awful, kill it with fire, review, snark, You're Next