You know, it occurs to me that modern film critics (I'm looking at YOU, Cheryl Eddy from the SF Bay Guardian) toss around buzzwords like they're a friggin' buzzword piñata and their audience is the lucky kid with the stick.

I got news for ya.  When you refer to a movie as "Hitchcockian", lady, you better fuckin' mean it.

That brings us to the abysmally offensive single-serving of Canadian bland I bring forth for you today, Proxy. 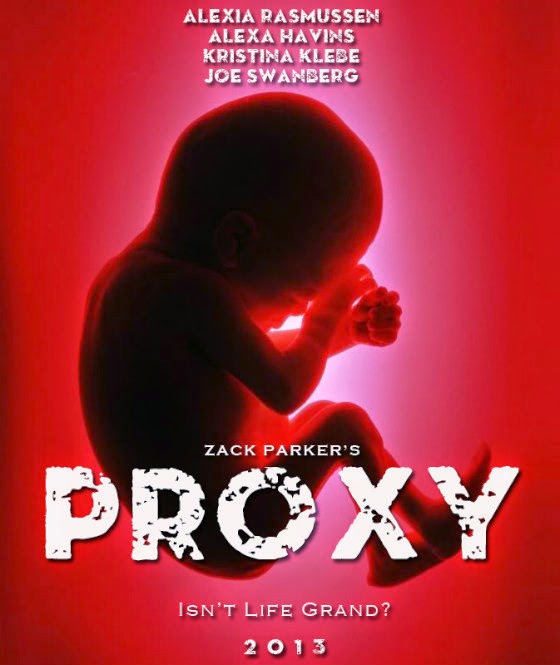 So, either Zack Parker hates children, hates women, hates mothers, hates lesbians or hates ineffective father-figures.  Seriously, dude, you can't hate everybody.  It's just not possible.  I have a feeling that he's just trying to mask some major issues he's got with society as a whole in the name of art.  And when you give me this much misogyny, homophobia and mommy and/or daddy issues in one 2-hour slow-burn of an art-house wreck, 10 minutes of it in ultra-slow-motion, it's really not hard to believe that.

You know what?  I'm gonna spoil the FUCK out of this one because I hate it that much.  Screw you and your pseudo-DePalma bullshit.

See her?  Up there?  She doesn't want to be pregnant.  It shows.  A lot.  She gets attacked outside her OB-GYNs office in a particularly nasty fashion that involves a brick being slammed against her obvious prosthetic of a pregnant belly repeatedly.

See the blonde soccer-mom on the right?  She goes to 12-step groups for grieving parents.  You THINK she lost her husband and child in a car accident.  Guess what kids.  The movie's called Proxy for a fucking reason.  I'll get into that later.

She a stone-cold bitch, yo.

And here's Little Miss "I didn't want to be pregnant" getting boned by two guys in a bar bathroom.  'Cause she CLASSY.  Oh, did I not mention that she has issues?  'Cause she has issues.  About two Barnes-and-Nobles-worth.  With a brisk trade in collectibles.

Enter the raging bitch, control-freak, parolee who just HAPPENS to carry a strap-on with her whenever she pops over for a quick rape session with her girlfriend... our friend, Little Miss "Get it out of me".  Oh, I didn't mention that Abort-o-tron was a lesbian?  Because she is.  Kind of.  I mean there IS that whole bathroom sex thing to consider.  Oh, and, hey.  When I say she really didn't want to be pregnant, she really didn't.  Well, OK, she wanted to be pregnant but just because it made her feel important.  She didn't actually want to be a mother.  So she had Rapey McEx-Con attack her in an alley and make it look like a freak thing.

So, anyway, back to the story, Perky Blonde O'Perky-Britches has a secret of her own.  I said you THINK she lost her husband and kid.  She didn't.  She's got them both playing to her own imaginary tune.  Because, guess what?  Much like the other Crazy Lady, she gets off on the attention that "losing her family" brings her.  Again, I'll touch more on this later.

So, anyhoo, Crazy Lady number 1 gets a crush on Crazy Lady number 2 because they have that weird "look at me, I'm special and crazy" thing going on and Crazy Lady number 3 gets a hair up her ass about said crush and then immediately goes to prison for something unseen.  1 steals 3's truck while she's in the hoosegow and goes to 2's house where she immediately drowns 2's kid and then gets shot a bunch of times by Soon-to-be-Distraught Father.

Emotional turmoil ensues.  StbDF does stupid shit, 3 gets out of jail and tracks her truck down at 2's house, busts in and gets her ass shot by 2 while 2 has a delusion of being a best-selling author and having another kid to go bugfuck over.

So... we've got insane women which, while not always a bad thing, in this case was entirely too much.  Not one but TWO "psycho-lesbians/depraved homosexuals".  A planned back-alley, late-term abortion.  A visible body-count of 2 and a half and a whole shitheap of the worst portrayal of a couple of cases of  Munchausen Syndrome/Munchausen-Syndrome-by-Proxy EVER.

Munchausen-Syndrome-by-Proxy, for those of you not aware of such a thing, is best described with the image of Eddie Kaspbrak's mom in IT.  A person with this disorder thrives on positive attention and gets it by exaggerating, fabricating or otherwise manipulating events, including inducing psychological, behavioral or physical problems (You do SO have asthma, Eddie!) in those in their care, so that they receive as much of that attention they can stand because they appear to be the selfless adult in this poor child's life.  It has the unique disadvantage for the victims in that medical personnel often enable the abuse and never know it.  Normally this is seen in child abuse or medical neglect cases, having a 6-10% mortality rate in the victims, and it's frequently misunderstood.  Munchausen Syndrome (Factitious Disorder) by itself is an extreme form of hypochondria in which the individual will do the same as the Proxy sufferer but to themselves.

Anyway, now that the factoid is out of the way, the only reason I watched this all the way through is because I paid for it.  Zack Parker needs beaten with an oar.  That is all.
Posted by BobSmash at 12:22 AM

Email ThisBlogThis!Share to TwitterShare to FacebookShare to Pinterest
Labels: as bad as Insidious, horror, Munchausen Syndrome, Munchausen-Syndrome-by-Proxy, Proxy, review, skip it, snark, so bad it hurts, You can do much better