And This is Why I Don't Trust Homeschooled Kids.

WHEW!  Life got busy all of a sudden.  Busy and scary.  But you're not here for that.  Let's just jump right back on in, shall we?

Somewhere along the way some idjit decided that "spooky" and "heartwrenching" belonged together.  This is not a new thing but it's not something I normally look for in my horror movies.  Despite my disgust for the sob story (because I like to pretend that I have the emotional range of a pencil even though I'm the guy that ends up with sinus issues for a week when I watch Rankin-Bass Christmas specials), occasionally one comes along that works. 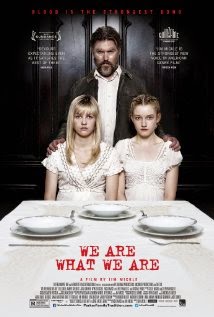 A remake of the Mexican film, Somos lo que hay (2010), the film follows two VERY sheltered teenage girls, Iris and Rose, and their father, an extremely religious man after the death of their mother who has a seizure on the way home from the grocery store in a downpour..  From that point forward, the girls are expected to carry on their mother's religious duties.

So.  The family is a cannibal clan.  It's not even subtle about it.  I'm sure the kids have known for years that long pig barbeques nicely.  And now they're all, "Y'know?  Maybe I don't WANT to have to butcher the butcher or skin the schoolmarm to get a decent meal.  Can't we just go to Mickey D's?  Seriously, there's one right down the street."

But noooooo.  Dad has to be all, "I'm the head of the household and your religious leader so you're gonna fast until it's time for the slashy-slashy."

This is a GOOD movie though so you're not getting any more out of me on it.  You'll have to watch it for yourselves.  It's a SLOW burn, so be prepared for that.  Like, stock up on munchies BEFORE you sit down because putting this on pause for a minute makes you miss details.

Seriously, though, this one is dramatic without being melodramatic and it could have easily crossed that line. You feel for the girls even knowing what they are and knowing that THEY know what they are.  They want to get out of the life they were handed and it comes down to some pretty drastic measures.   Even the smaller parts have some sympathetic qualities.  The little brother they want to protect.  The local boy that Iris has a crush on.  The neighbor (Kelly McGillis) who offers a vegetarian meal (HA!).

And the tension builds throughout.  It doesn't peak and valley, it crescendos. You come out of this one satisfied, you really do.  It takes a while to get where it's going but from there it takes you to some awesome new places that seem familiar but really aren't.  I thoroughly enjoyed it and I think you will, too.
Posted by BobSmash at 10:04 PM

Email ThisBlogThis!Share to TwitterShare to FacebookShare to Pinterest
Labels: awesomesauce, cannibal, horror, remake, review, snark, We Are Who We Are