We've been over this before, kids.

Add that to the fact that I love perky goths and Morticia Addams is a personal hero and, well, y'all knew I was fucked up BUT THAT'S BESIDE THE POINT!

So, I was just puttering around online and I spied a title that caught my eye.  It seemed so... derivative and trite.  Ripe for the picking really.  I figured, "Hey!  Blog-fodder!  I need something to really let loose on." 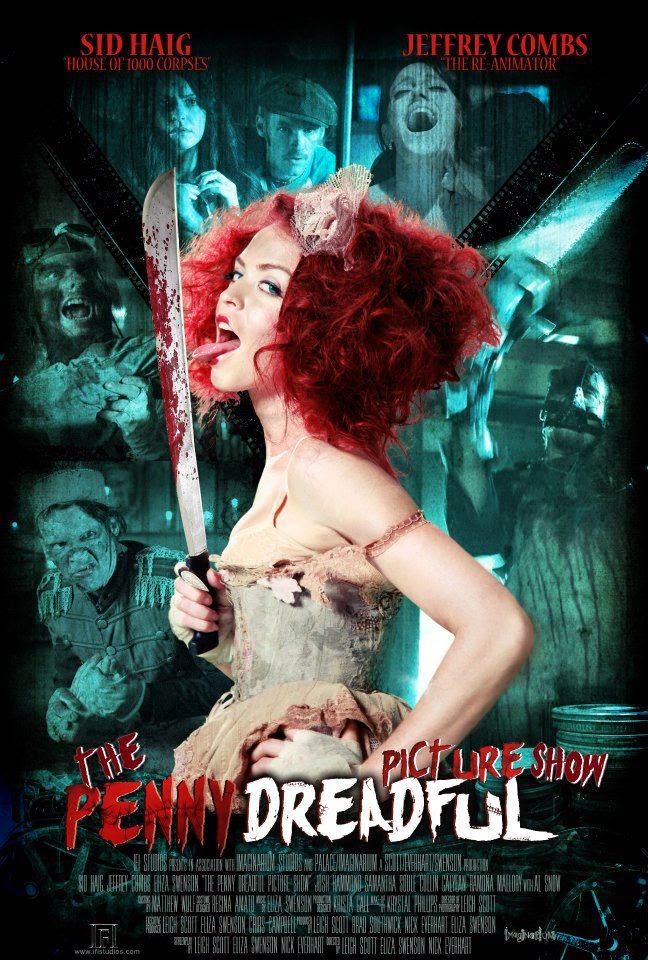 Now, you also know that I love anthology films (SOOOO MANY LINKS... search the page for serious), so I went into this thinking I would like maybe one or two and the rest would be crap.

Motherfucker, was I wrong.

See, when I picked this up, I was thinking it had something to do with the Penny Dreadful late night show in Massachusetts but, no, it's got nothing to do with it except that she has a werewolf pal and likes to watch movies.  Speaking of which, I think this may have been filmed in the Castro theater but I can't say for sure.  It looks a lot like the theater used in All About Evil.

So, yeah.  The wraparound is that Penny wants to get her first "True Love's Kiss" which, we can all plainly see her zombie butler wants to give her in the worst way but she manages to score a couple of dates for the evening.  She makes them watch movies with her to gauge their reaction.  She's disappointed but we aren't.

The first clip is short but effective and reminds me that creepy nursery rhymes are creepy for a reason.

The second clip is a relatively tame and slightly meandering vampire tale which is OK.  Not bad but not great.

The third, and longest, is a tale of 6 stoners who, for some stupid reason, are hunting a cannibal clan which isn't a cannibal clan at all.  Jeffrey Coombs plays his role HILARIOUSLY in this one and that makes it my favorite.  Plus, there's Sid Haig.  He's a staple.  Not an ACTUAL staple.  Get a dictionary.

No, for real, kids, this is the shit.  It's a little flat but it's an Indie, whattayagonnado?  It's still perfectly entertaining and with the psychopathic, psuedo-Victorian, stitched-up woman-child running the show, it's fucking DELIGHTFUL.  I loved every minute of the deliriously dizzy Penny and her half-baked crew.  They were FUN!

Like, I wanted them to be real people so I could watch movies with them (without talking) and join them on hair-brained, cartoon-y adventures and live with them in their abandoned movie theater and help them dispose of the bodies.  They need to have their own Saturday Morning cartoon.  I would buy all the toys and the lunchbox and the t-shirts and the cereal (with the free mini-hatchet inside) and the video game and ALL THE EVERYTHING!

PLUS!  Plus.  While this has some gore, there's not really that much and there IS a little bit of sexy-fun-time and just a touch of drug use but I would say that this is safe to let the older kids watch with no actual nudity.  It's not overly scary and that layer of Hello Kitty cuteness that Penny brings undercuts any kind of serious fear.  I'd rate this at a PG-13, personally (even though most of the PG-13 horror out there is utter crap).

This one didn't get a lot of press but if you can find it, DEFINITELY give it a watch.  You'll giggle in the RIGHT way.  For truly.

The only downside?  A whole lot of unnecessary CGI and a few bad prosthetics.  They do not detract from the movie at all. It's also trope-heavy as fuck but that has more to do with the mild lampooning of horror that makes this so gratifyingly giddy.

GO!  Get yourself some popcorn and load yourself up on sugar (except the diabetics because we don't get to have that kind of fun, anymore) and settle in for a fun ride.  You'll thank me for it.