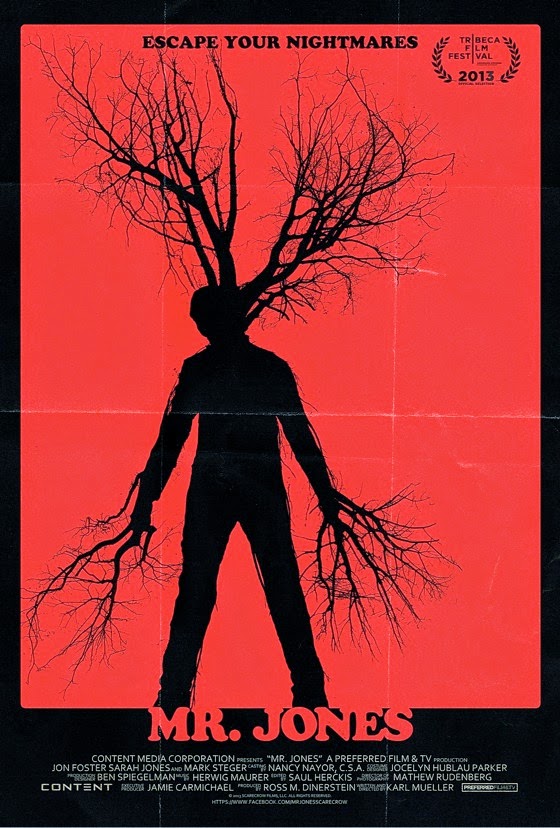 Because if I have to sit through another piece of trash like Mr. Jones, I will seriously shoot myself and implicate the director as the sole reason behind my suicide.  I don't CARE if it makes me look like a fuckin' loony.  I will tell the damn truth and let the world know that the reason I'm fuckin' dead is because of cheap-ass producers who don't want to pay for a damn screenwriter.

COUGH IT UP, HOLLYWOOD!  I KNOW you gots the cash.  If you DON'T then where are my fuckin' twelve dollars a pop gettin' to?  I'm betting on inexpensive sex workers (not that there's anything wrong with that by itself) with an assload of cocaine lined up on their backsides in expensive hotel rooms to make the girls feel fuckin' pretty.

If a Hollywood producer who makes found footage films tells you you're pretty, he's lying.

So, this steaming pile takes place in the woods.  Because these jackholes moved there.  To be alone and try to make a documentary and be all hippy-dippy commune-y or some bullshit.

Of course, dudehole stops taking his medication which is talked about for 5 fucking minutes and then completely forgotten about, even though you think they're gonna use some "unreliable narrator" goodness.

So, yeah, they find a scarecrow, or at least a crude approximation of one.  Turns out this is an art piece by the mysterious Mr. Jones.


And, you know what?  That's about all you need to know.

Somebody was trying to work out their vegan, tree-hugger, PETA-loving, Mother Goddess (not that there's anything wrong with any of this by itself) bullshit.  They were trying to force us into being all "oooooooh, protect the nature" and shit.  Only they were too damn vague and 90% of the viewers would not get it.  All they would see is the stupid-ass craziness that doesn't mean a damn thing.

This is a humongous fail-weight that destroys everything it touches.  It causes the black pit where I used to have a soul to weep inky darkness.  If I HAD a song in my heart, I would skip this with it.

No, seriously.  Skip it.

What the fuck, people, RUN!!  Run far and fast and then, when you think you can't run any more, run some more.  Escape this movie as if your life depends on it.  Because it does.
Posted by BobSmash at 9:40 PM