Alright, straight boys.  You wanted it, you got it.  I'm stepping outside of my safe zone, here, and bringing you Roger Corman B-Movie realness.

Ladies and Gentlemen, the boob joke that walks, Attack of the 50-Foot Cheerleader. 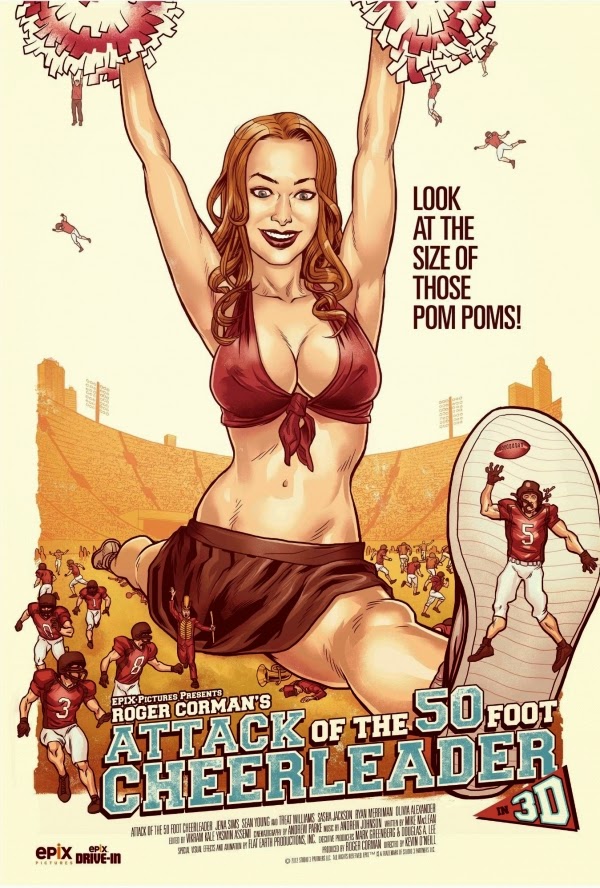 You know, I would question the wisdom of watching this one but it's Roger Corman and I tend to give the man a break.  We KNOW he's all about a cheap movie with boobs in it.  Lots and lots of boobs.  Attached to nubile young twits who are more than willing to show their boobs.  This is not to say that showing your boobs is bad.  I'm all about a nekkid selfie.  I'm just saying that the girls in Corman's films, even the smart ones, tend to have the brains of a pint of cottage cheese liberally laced with hash.

ALSO.  Before I begin, I am only counting this movie as "horror-adjacent" because it's not really a horror movie.  It's not about revenge and heartbreak and the horrible squishy-pain and the hey-hey-hey, geflavin.  It's about a smart, nerdy girl that doesn't want to lose her scholarship because mom is only going to pay for school if she gets on the cheer squad.  Because mom is a half-baked cougar who has discovered the power of wine (and is played by Sean Young).

To GET herself on the cheer squad, she willingly injects herself with a serum that she helped invent that would eradicate the need for plastic surgery (and, yet, somehow manages to pack a full fuckin' load of silicone into the sweater-puppies of the injectee).  Where would we be if this serum didn't somehow make her grow taller?  As in ten times her original height?  We get to see it happen to a spider that, somehow, doesn't actually manage to eat anyone on campus, including the mean girl in the shower that manages to trap something that's known for getting through small space in a bathroom stall.  It gets all squishied.

And then there's the mean girl head of the sorority who's out to get her because she's tall and beautiful, the owner of the serum who's more than happy to taser the shit out of a girl to chain her up to make her a test subject, the goth roommate with a thing for shoving organic cucumbers up her playthings butts, and the nerdy scienc-y boyfriend who's going to swoop in and save her... with science.

Y'all know me, I'm not a fan of sexism but dammit if this wasn't chock fuckin' full of it.  Roger Corman has never been known for messages in his movies and this half-assed "Be happy with who you are" screams of "I got nasty letters from N.O.W. and Andrea Dworkin".  Aside from that, though, it wasn't that bad a movie.  Yeah, it was all tits-a-bobbin and "Let's use our feminine wiles as a weapon" but for the most part it was cute.

Cute in that throwback to the 50s with boobs kinda way.  It's play-doh for the brain.  There's no darkness to it.  It's, for lack of a better word, even barring the objectification of women for objectification's sake, fun.

Let's just say I didn't hate it.  It's not something I'd watch twice but for trash cinema it wasn't bad.  The CGI and green-screen weren't done too badly, either, so I'm OK on that front, too. Your mileage may vary.
Posted by BobSmash at 9:40 PM