In another day of astounding cinematic failure, I sat and watched Leprechaun: Origins.

Because I'm an idiot, apparently.  An idiot who has done something so horrible in his life to deserve whatever the fuck this was.  I'm assuming some puppies were kicked but I don't remember kicking puppies.  I repent for kicking imaginary puppies.  I do not ever intend to injure puppies, imaginary or otherwise. 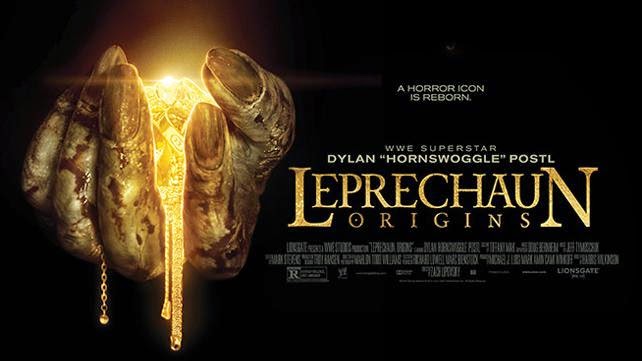 This almost-watchable pile of horse shit starts the way a lot of horror movies do.  With the road-trip.  In this case, four college friends taking a last-hurrah trip through Ireland.  One of them, of course, is a History major which is why they're in Ireland instead of, y'know, Fort Lauderdale.  Barring the copious amounts of booze and throaty, shaven-headed torch song performers, Ireland is all about culture and strife and history and kilts and motherfucking potatoes.  It's still in my top 10 travel destinations but that's a cultural thing because I have a sad, sad addiction to fairy tales.

And like any and all stupid teenagers, they decide to trust the fat, avuncular, shanty-Irish Mick who says, "Oh, hey, there's this big mine that has all kinds of history and booga-booga and stay in my cabin because I'm all generous and shit."

But did the jolly fat man tell them about the hideous creature that can see people in shades of gold that has to be appeased for taking all of the gold out of the aforementioned mine?  Nooooooooooo.  'Cause he's a DICK.

Don't get me wrong, kids, there's definitely a market for this kind of creature feature but for the life of me, I have NO idea why WWE Films (which should tell you everything you need to know right there) chose to reboot the Leprechaun series in this fashion.  Other than a short... thing... with a taste for glitter, there's nothing even remotely "leprechaun" about the creature.  They even say the thing's name is Tuatha Dé Danaan, for cryin' out loud and that's the name for fairies in general (the translation being "Tribe of (the goddess) Danu).

If they were going to refer to it as anything, they should have at LEAST gone by the fucking illustration and I need to smack me some researchers because it's not like fucking Wikipedia doesn't exist.

And let's talk about the creature, shall we?  I don't necessarily need kelly green swallowtail jackets and buckle shoes but, fuck, you gave me a beakless bird abortion with teeth.  Why would you DO that?  And where were the fucking shoes, man?  Leprechauns are COBBLERS.  They make SHOES.  Yeah, they're greedy bastards but you've turned something that, while it can be monstrous (since it's usually armed with a goddamn HAMMER), into a full-on thing with a hankerin' for human flesh and earrings and no reference to the source material other than location.

Plus, and probably worst of all, you took away the humor!  That was what we LIKED about the original series.  Darker and edgier is one thing but there was no attempt at ALL to temper this with any kind of humor.  We didn't need four-leaf clover jokes but fuck, man, come on. One whiskey-dick joke and we're done?  Seriously?

Yeah, there are some decent kills but most of it took place off-screen because they couldn't bother actually showing them, there was no final showdown and our final girl should have been shot for being Needy McWhiney-Pants when her "boyfriend" basically broke up with her at the beginning of the movie but never actually said anything to that effect.  About the ONLY thing I can give this is that you didn't feel like the actors were stumbling around the set huffing glue.  I'm telling you, if WWE films and the Soska sisters fuck up See No Evil 2, I'ma have to slap Katherine Isabelle to teach them all a damn lesson.  I adore Katherine.  Don't make me slap her.

Riverdance your way past this one, kids.  No, seriously.  Get that shit up on YouTube.  I will totally post that video right here.  You get bonus points if you can do it while eating a bowl of Lucky Charms.
Posted by BobSmash at 3:38 PM