The lengths to which greed will drive us are almost infinite.

The depths to which horror movies will sink ARE infinite and that's kinda why I like them.

Today we take a trip to wee Ireland and slap ourselves in the face with bad brogue and twisted fairy tales. 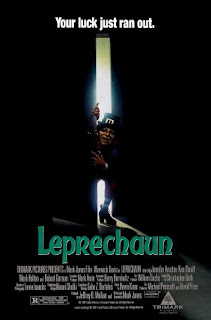 So, in this one, Dude O'Stereotype finds leprechaun's gold and takes it back to America with him.  Dude O' Stereotype dies of a stroke trying to keep leprechaun away from gold but leprechaun is stuck in a box thanks to its four-leaf clover kryptonite.  Fast forward to where Dad buys the house Dude died in and Girly MacComplain-y-pants bitches incessantly about having to spend the summer with her father amongst the sand and tarantulas and is basically our entire set-up for a big moral lesson about how money just isn't all that important.  Enter giant, strapping painter with not-quite-flowing Fabio hair who reminds us, again, that money is less important than a sincere apology.

Did Mr. Rogers write this?

So, anyway, we're then introduced to painter-dude's little brother and their benevolent handi-capable buddy and our cast is complete.


Then they find the crate and the trouble begins seeing as how benevolent handi-capable buddy brushes the clover off the crate. 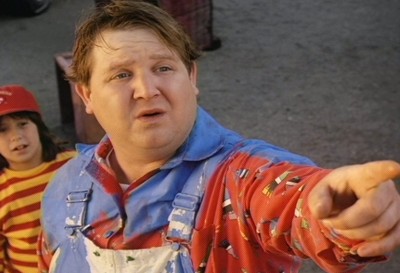 Also?  Timmy fell down the well.

So, now that the titular leprechaun is free, he can cause a whole lot of trouble, especially since little brother and benevolent handi-capable now have some of the leprechaun's gold.  And BHC swallowed it so it's there for AT LEAST 12-24 hours.

I'll tell you what, though.  As much of a wall of fromage this movie is, it's actually not bad.  It has that "made-for-TV" quality to it that a lot of late-80's-to-mid-90s horror movies possess but that doesn't take away from the wickedness of it.  The pogo-stick scene alone makes it worth it.  The movie is actually fun to watch and spins the supernatural slasher nicely.  It's a hell of a lot better than Wishmaster, anyway.


At the VERY least, it marks a decent start to Jennifer Aniston's career.  Of course, now that she's not doing the horizontal mambo with Brad Pitt, we don't see her that much, anymore.

I kinda miss her.

Yeah, she's done some good stuff, recently, but I would kinda like to see her more.

The world needs more sassy, aging Valley girls with awesome hair.
Posted by BobSmash at 4:51 AM