Nipping at Your Nose

Sorry for the delay, kids.  Mitigating circumstances and all that.

ANYWAY!  Let's get right to work, shall we?

It seems to me that the mid-to-late 90s hated horror movie fans and the 1996 Michael Cooney schlockfest Jack Frost is example numero uno. 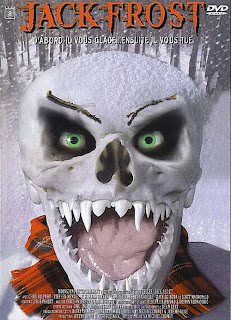 Yes, kids, the holiday season now has its very own magic snowman WITHOUT the benefit of Jimmy Durante and a silk top hat.   Oh, wait.  Did I say "magic"?  I meant mutant... as in "teenage" and "ninja turtles" complete with teratogen agent.

Yes, yes, dictionary purists, I know that "teratogenic" generally refers to developing fetuses BUT consider the root.  "Terato-" is Greek for "monster". 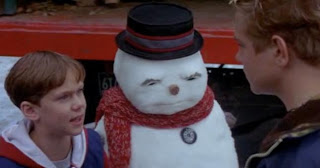 FYI:  This is from the Michael Keaton comedy of the same name.
Still freaked out by the talking snowman.

So, anyway, the murderer dude, who actually IS named Jack Frost (thank you, booze-soaked failed Hollywood writers), is being transported for execution (natch) when the transport vehicle gets into an accident with a tanker containing genetic material.  Jack gets free of the wreckage but in the process gets doused with whatever genetic acid this crap is and is basically melted into the snow.

The sheriff, who is all "I can't rest until I know this guy is gone" and "Billy, have you ever seen a grown man naked" to his obviously challenged son who can't cook OR deliver lines to save his life and, later, gets accused of murder, gets all rightly paranoid about Frost not being... y'know... actually dead. 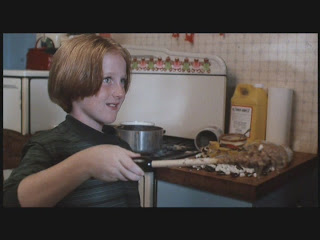 Aaaaaaaaaand, the rest is just a collection of the worst winter puns you and a first-grader can come up with.

Barring this movie's OBVIOUS comedic appeal, which, by the way, is pretty fuckin' magical, if you want to be SCARED, you should probably leave this one alone.  No, no.  If you MUST watch this film, watch it because it is quite possibly one of the best unintentionally hilarious films ever made, much like Mommie Dearest and Showgirls (which was a cinematic MASTERPIECE of "Oh, God, I didn't mean for that to be funny").

And when I say "unintentionally hilarious", I mean "they wrote this to be a comedy but what they wrote ain't the funny shit".

Plus, for all you American Pie fans, Here's Shannon Elizabeth being raped to death by a snowman. 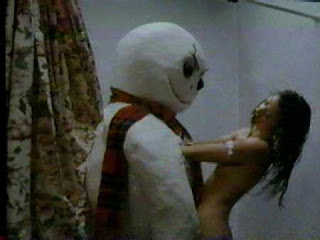 And his carrot nose grew three sizes that day.

This movie is maybe not at the top of the "so bad it's fucking amazing" heap, but it's still a hell of a lot fun to heckle.

You guys should totally rent this for a tacky Christmas sweater party!  It goes great with eggnog!
Posted by BobSmash at 5:00 PM