Dammit, I hate it when boredom gets the better of me.  It makes me watch the stupidest shit.

Take, for example, Brides  of Sodom. 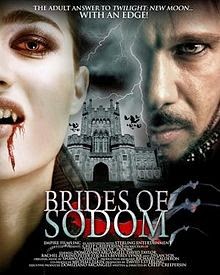 I have to describe this?  This is going to be like writing a critique on my elderly neighbor's morning deuce.  "Contains large amounts of corn which I'm sure that his doctor told him to stay from.  Slightly greasy-looking.  Hamster fur."

I really don't want to do this.  But I will.  I need to share the pain.  This is like herpes.  You can control it but it's never going away.

Gay vampire lovers that end up that way because of a curse after there are only, like, 5 human beings left on the fucking planet.  That's it.  The dudes are actually part of a love triangle with the one dude's SISTER?  I'm pretty fucking certain that becoming a vampire does not preclude you from the incest taboo.  So, yeah.  Sister gets jealous, there's horrible plotting, not one but three lame fucking escapes and the worst wig I've ever seen (and I wear some disgusting wigs).

I mean, I expected bad acting so that's forgiven but did I really have to deal with the simpering on the part of the wig-boy?  The consistent snarling of the que--- I mean prince?  The fucking "Blue Steel" of the 'roided out dicknuts who, I reiterate, did NOT show me his dick..

No!  Nnnnnnno!  Bad directors!  Stop giving the rest of us a bad name!
Posted by BobSmash at 11:26 PM