So, I was going to do a review of Attack of the 50-foot Cheerleader today but I felt this might be a little more important, at least from a "good horror movie" perspective. 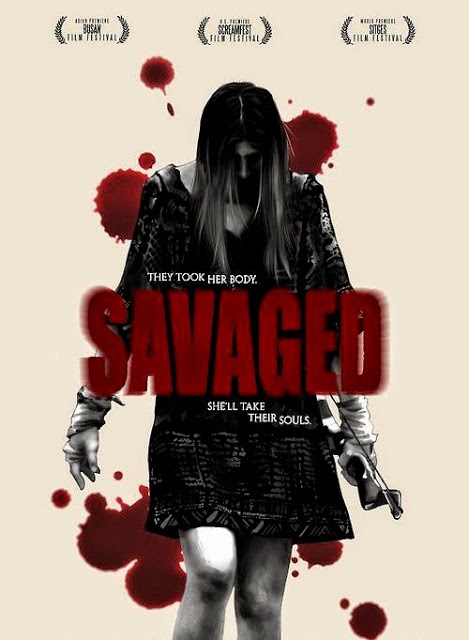 It's hokey but it does the job.

See, our main character is a deaf-mute girl in a peasant dress that looks like it was lifted straight out of The Texas Chainsaw Massacre and that's OK because as Final Girls go, she works out just fine, even though there are... complications.

She's on a trip to meet up with her fiancee when she runs afoul of racist, redneck dickheads that feel it's their mission to wipe the brown folk off the planet.  Because racism.  Did we mention that her fiancee is black?  Because that playes a huge part in this movie.

Yeah, so, in the process of running afoul, she manages to get herself taken hostage, tied to a bed in a shed with barbed wire and raped a lot.  Fortunately for us, that's not really shown.  As a result, she takes a couple of deep breaths, yanks her hands free (Well done, effects-wise.) and starts to run.  Of course, she doesn't run fast and they catch her and, thereafter stab her a lot.

Needless to say, there's revenge to be had and the local shaman who inadvertantly brings her back to undeath is kind of not happy about it because she manages to attract the attention of the spirit of the Native American gentlemen who was killed by the ancestor of said racist, redneck dickheads.

And there was scalping and stabbing and yanking of intestines and a zombie lady putting her arm back together with a piece of arrow and the world rejoiced for the use of practical effects because that's the only way horror movies should be made.

I lied a little there.  There was plenty of CGI blood and that distracted me a little.  You're not ILM, people.  Stop fucking doing that.  Give me squibs and karo syrup or shut the fuck up.

ANYWAY.  I kinda dug this one.  I mean, it was kinda heavy-handed with the racism thing (on both sides because frankly the portrayal of the shaman was hokey as fuck and all it needed was a wigwam and a feather headdress to complete the fucking picture.)  And what the hell was up with all of the soliliquizing.. soliloquying?  Saying 5-minute long speeches throughout the entire fucking movie?  The only one who DIDN'T talk should have been the one saying shit out loud.

On the flip-side, though, we got a kick-ass handicapped anti-hero, positive racial role models, a kind of awesome downer ending that didn't leave this one open for a sequel and some very good acting.

I know this is a quick one, kids, but I think y'all should give this a shot.  And smack a redneck afterwards.  You'll feel better for it, I promise.
Posted by BobSmash at 10:47 PM