By now, I'm sure you've all noticed that I love me a good werewolf film.  That trend continues with today's pick, Wer.  And I'm sure you'll all pick up on the fact that this was produced by the folks behind Insidious and Paranormal Activity.  They seem to be following my advice this time and GOOD.  Lazy-ass bitches finally released decent content. 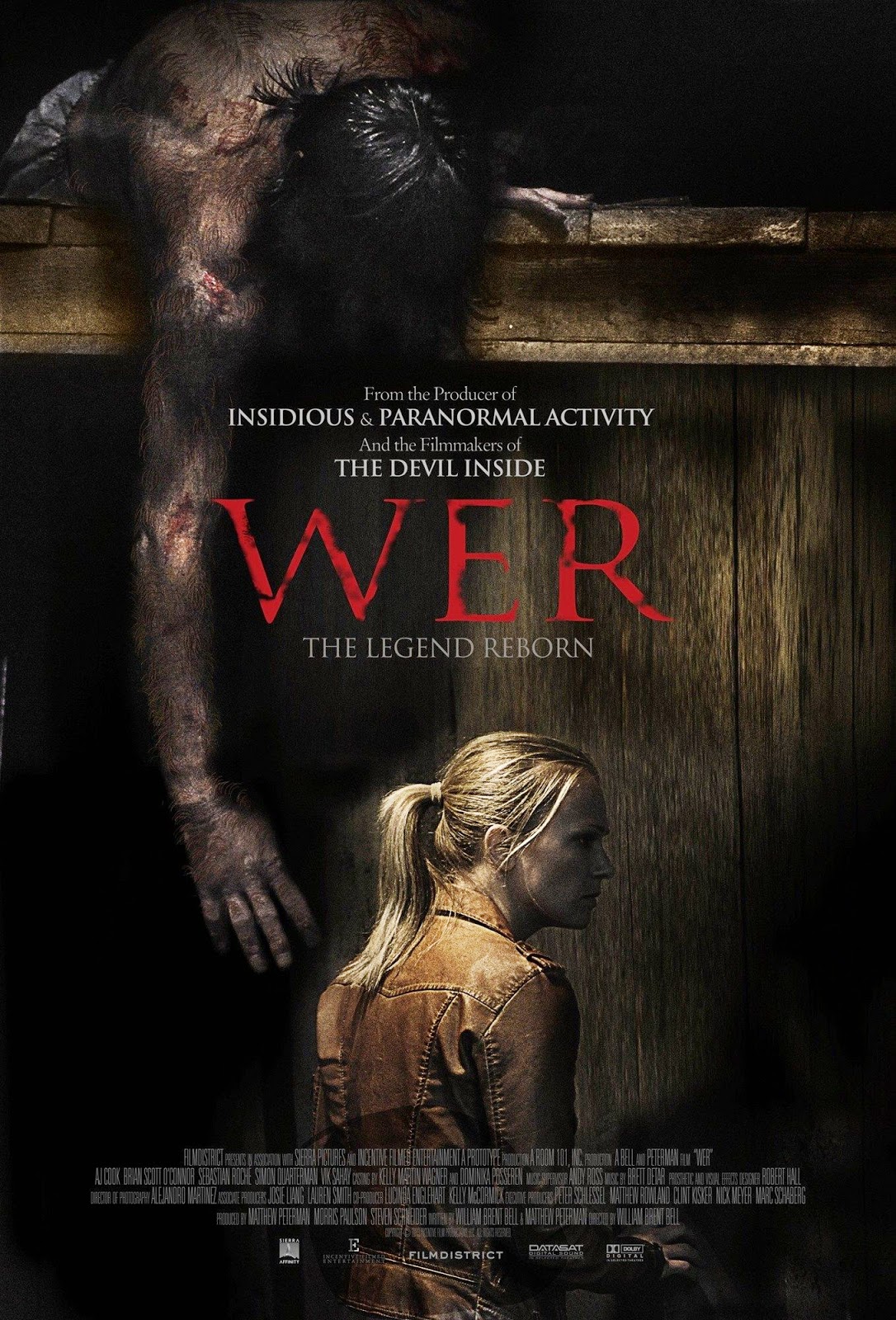 Wer is an odd duck.  It seems to have torn itself directly from the pages of a 14th-century woodcut print rather than anything that we would recognize as "werewolf".

Our story, though, takes place in modern France, near Lyon, which is somewhat appropriate because it fits their legend of the loup-garou, and the unfortunate attack of American tourists by... something.  (Yeah, we know the name of the fucking movie gives it away, Sparky.  Slow yo' roll.)  In the mock news coverage that starts the film, we know that a man has been arrested for the murders but an enterprising young expatriate lawyer takes the case because she's damn sure that an animal was the culprit.

Why do enterprising young expatriate lawyers always take these cases and why are they always so very fucking wrong?

The EYEL scrounges up a team consisting of her ex and a dude that got busted in America for selling out a client and they set about trying to exonerate the suspect by way of Porphyria (Which, by the way, cannot be transmitted by anything but genetics, despite what they say in the film although it can be induced through mercury or arsenic poisoning.  Of course, they also say that Porphyria can cause superhuman strength when it patently cannot.) and subject him to a battery of test that, quell fucking surprise, cause an "attack".

And by "attack", I mean tearing loose from his restraints, killing the doctors and nurses all messy-like and fleeing into the street.  We catch a glimpse of an almost transformation when the cops corner him into an abandoned buliding where he proceeds to feed them their own entrails and gnaw off their fucking faces then jumps out of an eighth-story window and lands on his goddamn feet whereupon he starts running again at speeds faster than 60 miles per hour... on all fours.

Oh, and on top of this, remember that whole "transmission" thing I mentioned?  Apparently they're going with D&D rules on this one because one of the legal crew managed to get infected by a scratch and failed his fucking endurance check.  We know this because one of the tests is a "corneal imprint" which involves swiping a microscope slide across your fucking eyeball then exposing the resulting goo to a chemical of some sort and the assmonkey does this to himself.  The slide, in this case, is BROKEN and slices through his fucking cornea all up close-like. Y'all are damn lucky there are no pictures.

Anyway, I have to say that I really liked the beginning of this one but towards the end it just fell apart.  I mean, yeah, there's the fight between two werewolves (one of which has shaved everything it can see because no body hair, including eyebrows, gives you an alibi when the police try to identify you as part of the problem later) that was done well and the portrayal of bestial human beings was OK but there was just this whole CSI feel to it that was just not horror.  It turned into an action flick at some point and that's OK but it was kind of a let-down.  I mean, Van Helsing (a vastly underappreciated movie) was better.

Make up your own mind, really.  It was good but not as good as it could have been.  There's a lot of found footage to this one, too, which I was not really appreciative of although, to be fair, that wasn't a large part of the movie so I'm willing to forgive (SO MANY LINKS!  IS TOO MANY!  IS TOO MUCH!).

All in all, though, it IS a well-made movie that had plenty to appease the gore-hound and ALMOST appease the intellectual.  It just had things in it that I didn't care for and there was a whole lot of not-research in the script which was distracting to a know-it-all like myself who actually wrote a term paper on porphyria and its connection to werewolf and vampire legends in high school.

Because I'm THAT kind of horror nerd.
Posted by BobSmash at 10:22 PM

Email ThisBlogThis!Share to TwitterShare to FacebookShare to Pinterest
Labels: did not do the research, horror, porphyria, review, snark, Wer, werewolf, your mileage may vary