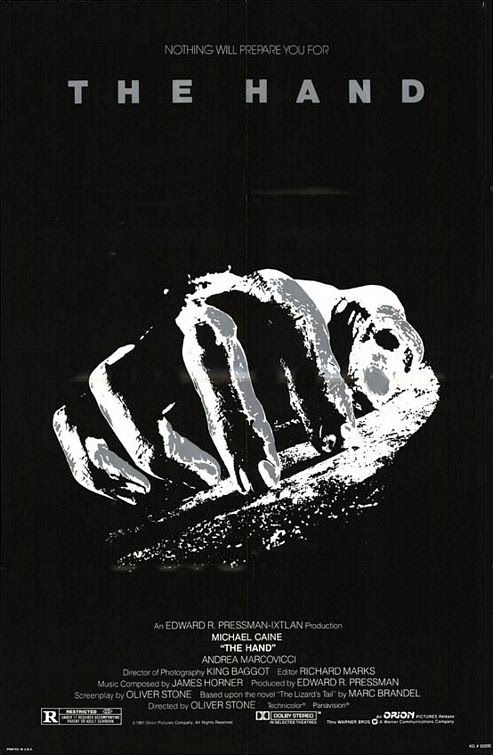 I really have no idea why I remember The Hand.  I'd only seen it once before I rewatched it for you guys.  There's not a whole lot about it that's game-changing in the world of horror.

In any case, the story follows a cartoonist who, during the course of a fight with his wife over the direction their marriage is going, loses his hand in a car accident.  The hand itself, is kind of psychotic which is reasonable since all it did was draw a Conan ripoff for ten years.  I'd be pissed, too.  So, we follow this man through the course of his relationship and his recuperation and discover that he's really quite insane.  It's totally a thing.

As he's recuperating, and discovering his madness, the hand decides to take things into it's own grubby digits and starts offing people and scaring the cat so bad it actually launches itself out of a window.  Suicidal cat scares are totally the worst, by the way.  Fuckin' directors.


I wish there was more to say about this.  It's well-written and well-acted which are bonuses but you kind of feel no sympathy for the guy.  His life is falling apart around him, not the least event of which is trying to cope with the loss of a limb, and, yet, you just want to get him off of his lazy ass and tell him to suck it up even though we ALL know that this guy is devastated and should be cut a little slack.  I mean, he got the awesome robot arm and shit.  He's Steve fuckin' Austin and all he does is whine and get all maudlin and morose and "You're not taking my kid away from me."  (Said kid, by the way, played the young Christina Crawford from Mommie Dearest.)

On the other hand, (spoiler alert) the wife SERIOUSLY deserved it.  She gave NO reason for her wanting to leave except she was being all Yoga-nutty and felt unappreciated but she didn't actually recognize any appreciation she DID get.  The two of them probably shouldn't have married to begin with.

And everybody else that Cain interacts with, barring the prosthetician that gave him the sweet robot masturbator, were utter dicks.  They started nice but every single fucking one of them displayed a selfishness on everyone's part.  Even the daughter's.

I do still like it, but that's due to nostalgia over anything else.  This is one of those "Your Mileage May Vary" flicks.  It's not great but it's not good, either.  It does give us a nice look at Stone and Caine's early career, though, and I appreciate that.
Posted by BobSmash at 10:12 PM