How the Mighty Have Fallen

We've talked a lot about Peter Benchley here but this isn't about him.  It's about how producers and directors completely forget how to fucking feed a cash cow. 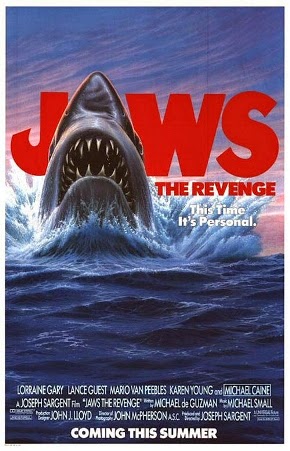 After Jaws 3-D came out (which was fucking brilliant in its suckitude), I don't think the world WANTED a new Jaws film because, seriously, the next step was either gonna be Disneyland or this.  We got this.  A shark REVENGE film.  It says so right in the title.  "This time it's personal" it says.  A shark, who been done wrong by humans, follows the Brody family in order to eat them all like the tasty tidbits they really should have been two movies ago.

It manages to get one of them and, fuck you, I cheered.  What police officer goes out on a boat alone KNOWING that he's been face to face with the shark that his dad electrocuted AND had it's spawn follow him and his brother to Sea World.  SEA WORLD!  In case you're wondering, not ONCE does Sea World get mentioned in this fourth installment and, goddamn it, I want to know why.

Speaking of Jaws 3-D, why the hell did they replace both of the Brody boys with actors that were much younger than the versions portrayed in the previous film?  Oh, that's right.  They wanted to pretend the third movie never happened.  Assholes.

So, yeah.  The shark follows a grieving mother and her family to the fucking Bahamas where, it's said, they don't go.  Which is kind of a lie because they've been found in nearly all coastal and offshore waters that have a temperature between 54 and 75 degrees Fahrenheit.  ANYWAY.  It FUCKING FOLLOWED THEM because it had a vendetta.  Sharks, to date and to all known science, are not fucking telepathic.

Michael Caine needs to have not been anywhere near this one.  His "paycheck pictures" are legendary but fuuuuuck.  I'm surprised they haven't made the producers edit him out of the movie, yet.  For serious, the man skipped out on ACCEPTING HIS OSCAR because he was filming this trash.  And Mario Van Peebles?  I have no idea why he's even in this because the fucker wrote his own part.

This movie, by the way, is comedy gold, even if it does suck out loud.  Richard Jeni's act in the 80s used Jaws: The Revenge as a substantial part of his act.  Because no comedy writes itself faster than a stupid horror movie with an unacceptable premise and horrible acting on all parts.

From the Banana Boat girl whom you can SEE actively puts her leg in Bruce's mouth to the airplane water landing that should have killed all of the passengers, the sheer unbelievableness of this is what kills me.  Yeah, we expect the rubber shark, although, it probably should have shown up much less and I think it's only there so some effects guy can say "There, I fixed it", but fuck, really?  You couldn't have just written new characters or expanded on 3-D?

Once again, do not make a drinking game out of this.  You will die.  A lot.  Your liver will actively go on strike and walk out of your body under its own power.

It's known as "The Worst Sequel of All Time" for a goddamn reason.
Posted by BobSmash at 9:44 PM