Peter Benchley is a Little Obsessed.

Peter Benchley, as you all should know, is the author of Jaws and deserves his place in shark movie history.  After that, though, it was all shitty, unauthorized foreign remakes and sequels that were not... ummm... good.  We'll get to that later this week.

The late 90s, though, for some damn reason, were all about the Peter Benchley miniseries.  Well, at least two of them.  First, there was The Beast in 1996, all about a giant squid and 1998s Creature took a step beyond "shark".  It's still Shark-Adjacent, though, so that's why it's here. 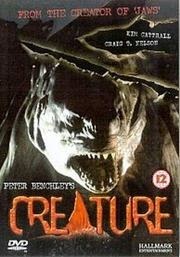 Now, before I get into the movie, the book it was based on, White Shark, was kind of fucking amazing and is definitely worth a read even if it's just a "guilty pleasure" book.

No, seriously.  Read the book.  Because it's better than this half-assed TV movie.

So, here's the dillio in the movie.  The Navy's been playing around with DNA and creates a human-great white hybrid.  It gets loose and it's up to Craig T. Nelson, his (ex?) wife and their unruly 15 year old on roller blades to stop it with the help of their islander cabana boy and the crazy dick that let it go to begin with.  Plus the Navy wants to make sure this story never gets out.

It takes about three and a half hours to tell this story.

Well, not too badly because I was at least able to sit through it and the creature effects were kind of awesome in that "obvious puppet" kind of way but it's certainly not anything to write home about.

Don't get me wrong, I love me some Craig T. Nelson and Kim Catrall but fuck if this wasn't some middle of the road trash saved only by the presence of Stan, the Monster Man, Winston.and his totally phoned in creature effects.

Now, in the book  the experiment was decidedly World War II German in origin but I'm thinking that the studios couldn't put an obvious "Nazis attempt world domination" plot on the tube without damaging relations with Germany and starting some kind of Aryan resurgence because they think people are stupid and can't wrap their heads around the fact that the Germans really did some fucked up shit and would have a hard enough time with accepting that this thing survived 25 years rather than 60 without getting all freaky with an actual shark.  This plot point, by the way, is only mentioned once and is promptly forgotten about.  Because dumbness.

In the meantime, though, we have the wife's research which takes up about 5 minutes of screen time to A) provide a MacGuyver moment that ends badly and B) to show Kim Catrall playing with a sea lion.  (You may Rule 34 this for yourselves.  I'm not playing that game today.)

Plus the editing left some things to be desired.  I kept seeing jumps that led me to believe that there were serious continuity flaws that were either created or horribly covered up.  They pained me.

So, yeah.  If you need to kill time or you have a need to make fun of late 90s board shorts, this is the movie for you.  It's really nothing special and it had the potential to be awesome.  It just fell flat.