That's right, bitches, we're covering the reason we won't go into the water all week.  Sleek, blue aquatic missiles with teeth.  Apex predators who want to eat our faces.  Well, maybe not OUR faces in real life since more people die of bee stings and lightning strikes every year than shark attacks but you know what I'm saying.

So, yeah.  In preparation for this week, I sat my happy ass on the couch and turned off my brain, yesterday (FINALLY) and binge watched BOTH Sharknado flicks for you. 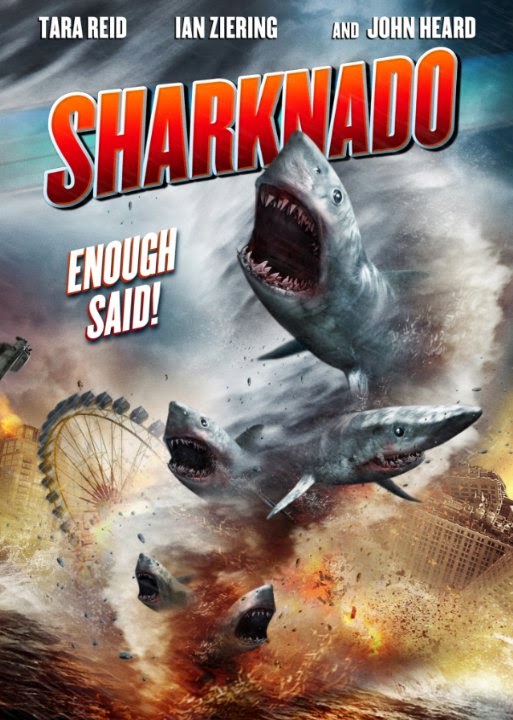 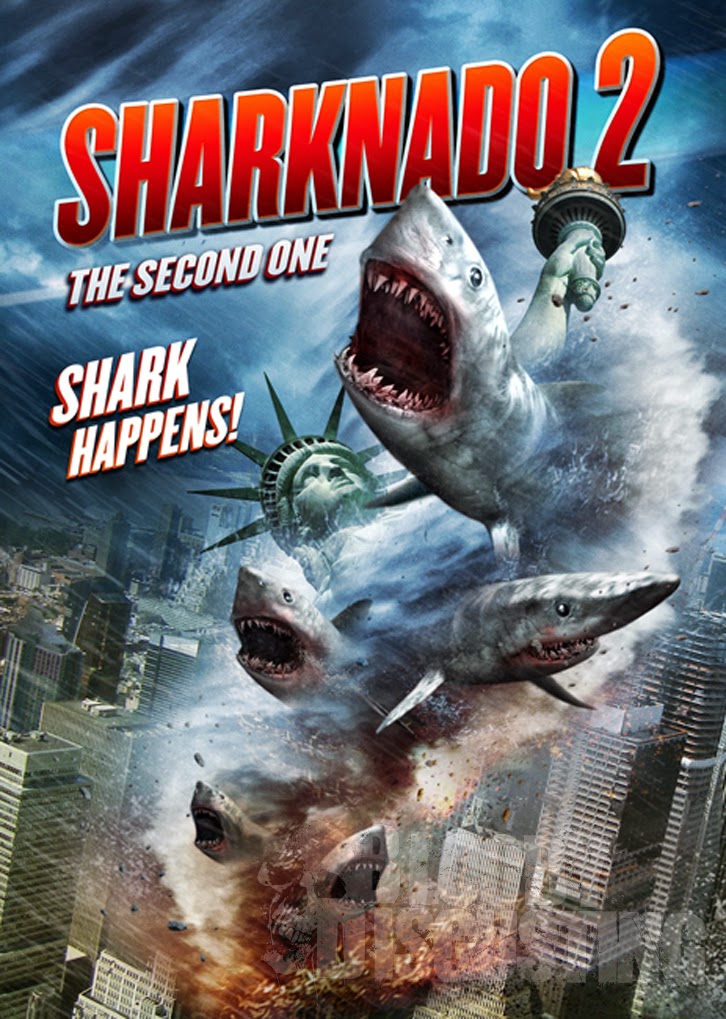 Syfy movies have caused me to lose faith in humanity, for reals.

Now, let's get this straight right off the bat, kids.  These are PAINFULLY bad movies.  So let's keep that in mind as we move along, shall we?

Sharknado starts with a completely throwaway thing about a shady fisherman and his equally shady Asian business associate who are trying to out-shade each other without knowing that the titular sharknado has already begun (Yes, tornados can suck up sea life, by the way... it just doesn't remain living while it's in there and the worst thing that would happen is you getting smooshed by a couple hundred pounds of dead fish).  Both of them get their faces chewed.

Then, there's bad surfing by Ian (pronounced EYEan... like a douche) Zeiring whose character's name is Fin (fucking seriously?),  the handsome, Tasmanian best friend, Baz, getting nibbled on enough to get him a big bandage (and the keys to my bedroom but that's only because Jaason Simmons is hot and plays for my team), the girl who's all shark-hatey for some vague reason that isn't explained until almost the end of the movie and the main guy getting all "shit's going down but we don't know why so I have to save my family even though Tara Reid and her giant saggy nipples still can't act her way out a paper bag and hates me now because we divorced for some stupid reason that's never fully explained."


Then it's all OHNOES!  Los Angeles is flooding, Los Angelinos apparently gather in small groups when things get wet and then complain about the non-existent traffic problems and people that live near a beach know nothing about getting out of the water!

By the way, can someone tell me how a house on TOP of a hill gets flooded enough to garner a fucking shark in the living room?  One that is shown to have adequate drainage just below it?

So, yeah, off to rescue more people.  Tara "Unfortunate Boob Job" Reid gets all "You're saving people and this is why I divorced you" and Cousin Oliver has a lame panic attack and gets smooshed by the Hollywood sign.  They reach the field where the eldest child is taking flight lessons (also, really unexplained) where they gather their forces and plan to send explosives into the sharknados.  Because science.

Freaky birth analogy happens because that shark he jumps into?  It's the one that ate shark-hater girl.

ANYWAY!  On to round two where there's already been a book published and the reconciled couple goes to New York for TV appearances and, basically, everybody and their damn mother wants a fucking cameo and that's what the second one is about.

Yep.  Sharknados take Manhattan.  Like the damn Muppets.  Which is totally funny because the CGI guys need to fuck right the hell off.  Because their CGI-Fu is weak and the sharks look less convincing than a Muppet.  We could have had Elmonado and it would have looked better.

Oh, and did I mention Mark McGrath with his ALSO horrible plastic surgery?  Because he's the brother-in-law.  Why did Syfy make me stare at his ugly mug for 2 hours?  Why?

So, anyhoo, all of this is a giant clusterfuck of delicious awfulness.  Every single one of these people just phoned these movies right the fuck in and I'm kind of glad they did.  It lent to that intentional unintentional hilarity that you would expect from movies with Sharknado in their title.  I don't ever want to watch them AGAIN, mind you, but these movies and a couple of Hot Pockets kept me entertained for a few hours.  Badly entertained.  Because they seriously strapped a buzzsaw to Tara Reid's arm and made this happen on the roof of an F.D.N.Y firetruck all Matrix-y. 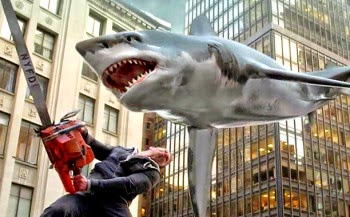 I don't know HOW the Hot Pockets people don't get sued for mouth damage, by the way.  You can let those fuckers chill out for an hour and you'll STILL burn your lips.

Yeah, so, uhhh... I'm not saying to skip these because you get what you pay for.  In fact, I'm saying to watch them because the awfulness is so hilarious that it could bring a suicide back from the ledge.  You think YOU'VE got it bad?  Take a look at the careers of THESE assholes.