TO THIS DAY, I cannot watch this movie all the way through.  Gonna warn you, now.  This movie is 31 years old.  If you bitch about spoilers, I will make it my mission to slap you. 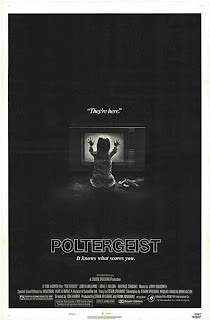 So, yeah.  The Freeling family lives in Cuesta Verde, a quaint planned community in California.  Their children are perfect and the youngest, Carol Anne, is cute as a button.  Particularly when she holds conversations with the television.  A-fuckin'-dorable.

After this first bout of weirdness, more crazy shit starts happening in the house.  Furniture stacks itself, breaking glass, twisted silverware.  Things that, on the surface, make ya go "Hmm".  And then shit gets truly fucked up.

The tree in the backyard?  Tries to eat the son.  Dad and older sister manage to rescue him but Carol Anne is sucked through a portal in the closet.  She can still talk to them through the TV, though. 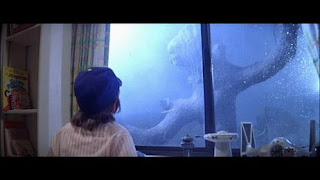 Fuck you, Treebeard!  I'll send you the therapist's bill.

And then the parapsychologists come in.  They inform us and the Freelings of the MULTIPLE hauntings they're experiencing and Dad's boss lets slip that the community is built on top of a cemetary.

The two remaining kids are sent away for their safety and Tangina, the magic munchkin, is brought in to help them retrieve Carol Anne from not only the spirits who are attracted to her life force but a demon who's out to manipulate the other spirits by way of the little girl.  We never SEE any of this but it's all ominous and shit. 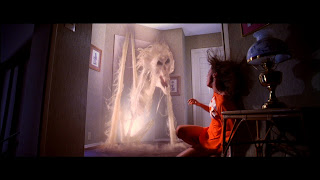 In the process of rescue, Mom and Carol Anne get to experience birth again and Tangina lies to their faces.  The Demon fucks with them again after the team leaves and they find out that they moved the HEADSTONES from the cemetery but not the BODIES.  On that note, they flee the premises (like any sane person would) and the house implodes into another dimension.  Then they decide that television is for losers and shun it.  SHUUUUUN!


Like I said before, this movie flips me right the fuck out.  The tree scene?  I have to leave the room.  That fuckin' creepy-ass clown doll?  Oh, FUUUUUUUCK YOOOOOOOOUUU!  I'm not afraid of clowns OR dolls in particular but that sonofabitch can die in a goddamn fire.

The other scene that really got to me?  The steak in the kitchen.  First off, maggots are fuckin' NASTY and then the skin-peeling that follows?  "Chunky" does not begin to describe it.

The fact that I am STILL legitimately disturbed by these images is a testimony to Spielberg's and Hooper's collective craft.  Keep in mind that Spielberg, contractually, could not work on any other project than E.T. the Extra-Terrestrial while that project was in production which is why Hooper was brought in.  The collaboration between the two of them brought us a truly iconic "haunting" film that has often been imitated but has NEVER been duplicated.

Its examination of 80s consumerism is highly underrated as well and Poltergeist is a lot less conspicuous about it than other films.  The "build it faster and cut corners to get the cash faster" mentality caused a lot of people to question planned communities and middle-class values.

Hello.  Have you accepted Jesus as your Lord and Savior?

The air of mystery surrounding the entire series due to a so-called "curse" also adds a little edge to this movie.  I don't believe in curses but the odd coincidences are still something to talk about.

In any case, I have always recommended this movie and I always will.  This is even a great "family" horror film if you have older kids.  It's a bit intense for the younger ones but older kids will get a thrill.

I hear-tell that there's a remake in the works.  I'm not sure how that's gonna go over.

P.S.  Like the new site?  All of the artwork was done by my husband, Scott!  You can see more of his work at http://verdantartist.com
Posted by BobSmash at 1:54 PM