Ah, 1982.  The golden age of the slasher film.  Following the success of such films as Halloween, Friday the 13th and Prom Night, Roger Corman, feminist writer Rita Mae Brown and director Amy Holden Jones decided, "Hey!  Let's screw with the men and make our OWN slasher flick!"  And, thus, The Slumber Party Massacre worked its way into our cult-movie-loving hearts. 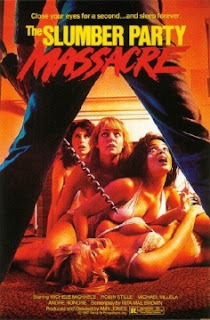 Trish Devereaux (which sounds all decadent and shit) throws a slumber party while her parents are away because 18-year-olds still do that, apparently.  The neighbor is supposed to check in on her because her parents still don't trust her and, seriously, they shouldn't.  Because she's 18 and, as much as we would like to think that 18-year-olds are responsible, they really aren't.  Unless your 18-year-old owns their own home and has already set up a 401k, there's really no reason to ever completely trust your child with your home and belongings because 18-year-olds still have fond physical memories of floods of hormones and basic teenage craziness.  Hell, I'm 40 and I still occasionally have to ask my mom for help.

As it happens, because this is just another day in Horror Town, a serial killer with a fondness for power tools, Russ Thorn, has just escaped from prison.  It's a PARTY, now, bitches.  He introduces himself by killing a telephone repair-woman who apparently can't scream loud enough to be heard through the walls of a van.  I'd have had that checked out well before now. 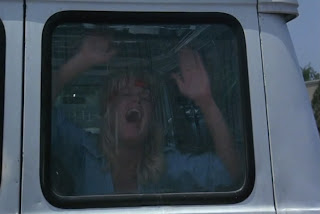 So, yeah, Trish invites her friends Kim, Jackie and Diane to her party.  She also invites the new girl Valerie but Val refuses after she hears Diane talkin' smack.  That's probably a pretty smart move.  She has to babysit next door, anyway.  After school, we get to watch Brinke Stevens be drilled and not in a pervy, porny way.  Did you know that Brinke Stevens was a member of MENSA and has a Masters degree in Marine Biology?  Whodathunkit?  All that to be best known as a scream queen.  Follow your bliss, I guess. 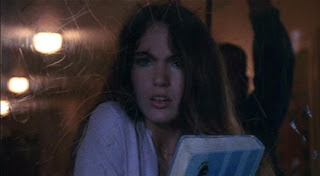 ANYway, during the pot smoking and girl-talk, the fun begins.  Diane's boyfriend and a buddy spy on the girls undressing.  The neighbor who's supposed to check in on them gets murdered, Diane and her boyfriend go off to make out and when Diane goes to see if it's OK to leave and get boinked, he's decapitated.  Then Diane finds him and gets a face full of power tool herself.  Then they discover that the pizza guy has had his eyes gouged out and the phone is cut off ("Oh, no!  The line is DEAD!").  Fortunately, the gym coach, whom the girls had been talking to on the phone, gets enough of the message and heads over.

The two remaining boys are gruesomely murdered on Val's lawn which doesn't cause any suspicion at ALL and then Thorn gains access to Trish's place and murders Jackie in the face.  Trish and Kim hide and mistake Val, who has decided to go all "Nancy Drew with a machete" and investigate, for a playmate of the killer.  Kim gets all drillered when Thorn enters the bedroom through an open window. 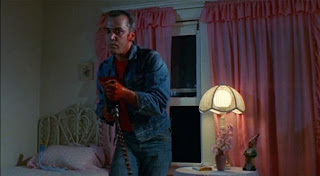 Coach Jana arrives and gets quickly dispatched then Val chases Thorn out with the machete, Thorn appears to get killed then jumps out of the pool and has to get stabbified again.  The girls cry.  The cops arrive.  Aaaaand scene.

SO... what we have to remember about this movie is that it was MEANT to be a parody.  See, Rita Mae and her "unshorn sister of the apocalypse-hood" meant for the movie to lampoon the sexist nature of slasher films as they stand.  Corman and the other producers decided to film this as a straight slasher.  As a result, we get your standard sub-par acting and TnA but we also get a touch more humor than you would normally get in a slasher flick.

And that bugs me.  I'm kind of wondering how this would have turned out if it WAS filmed as the parody it was meant to be.  Personally, I would LOVE to get my hands on the original script and film it myself.  I have a camera.  I'd need to get lighting but your average handycam works just as well as a movie camera, I can do special effects for this myself since there's not a lot in the way of prosthetics, fake blood is cheap to make and I have friends that would LOVE to make a movie.

Seriously, though, I kind of like the IDEA of feminist slashers.  Frankly, I'd kind of like to flip it all the way around and have an all-male cast be hunted down by a female killer.  (Friday the 13th doesn't count.  We didn't KNOW Jason's mom was the killer until the end.)  The end where Val "castrates" the killer by cutting off the drill bit?  A little anvilicious but kind of genius.  It's great that the killer has a face in this one, too.  There's no mystery to it and I think that's cool, occasionally.

All of that being said, this move sucks out loud but it's that brainless, drinking game kind of suck that makes it fun.  If you're bored, pop this one on and laugh at it.  If you're in the mood, tape all of the comments you make watching this barker and send it to me Riff-Trax style.

'Cause that would be AWESOME!
Posted by BobSmash at 10:42 AM