Stop Screwing With The Damn Sharks!

Sorry for the delay, kids.  I would have had this out sooner but my car is being a little bitch.

ANYWAY!  There are times when it gives me great pleasure to bring you something that I like, even if I like it for exactly the wrong reasons.

Such is the case with the 1999 Shark masterpiece Deep Blue Sea. 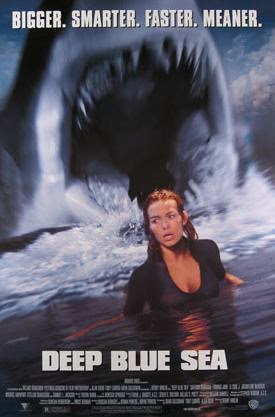 Granted, there isn't a whole lot to compare it to in the "killer shark" subgenre but, hey, I do what I can.

This tasty little snack showed up on the scene in 1999 with it's easter eggs and it's LL Cool J and its pre-Hung sexiness Thomas Jane all shirtless and wet and... ummm... wait.  I lost...  Uh... What was I saying?

OH!  Yeah.  Right.  Got a little distracted in my salty bits there for a minute.

SO... yeah.  I actually liked Deep Blue Sea a lot.  Not because it was Oscar-caliber.  Not because it actually set women's depictions in movies BACK a few decades.  Not because it had awesome special effects (which it did, for the time, but that's beside the point).  No, none of those things.  I liked it because, as much as it tried to be brainy, it was easier to take if you didn't think about the WHY and focused on the HOW.

Here's the sitch with the story.  Samuel L. Jackson owns a pharmaceutical company.  He wants to know how Saffron Burrows is doing with her miracle Alzheimer's research because, duh, everybody's all interested in that shit.  (Shut up!  That link is totally appropriate there.)  Thomas Jane is the bad boy smuggler all turning his life around and pulling license plates previously swallowed by other sharks from the jaws of deadly Tiger sharks and being all swoon-worthy and shit.  LL Cool J is a damn cook.  Because racism.  Stellan Skaarsgard is the absent-minded professor who pees where everybody can watch.  And some other people.

Of course, in classic Hollywood style, nothing can just be fucking normal so a perfectly normal day trip to Sharkschwitz to visit the workings of Mrs. Mengele turns into the storm of the fucking century and, OHNOES!  The sharks have the average intelligence of a fucking toddler thanks to Burrows and her decision to be a damn deity and, therefore, are fucking ninjas.  They not only figure out how to get out of their respective areas in the compound, they figure out how to get INTO the compound and have the idiot monkeys blow up the pylons for them so they can get out of the compound altogether (since the titanium cages that held them (with no roofs) will now be underwater) because THESE experimental animals were never meant to be sterile and the whole world needs a swarm of hyper-intelligent sharks who will therefore be our aquatic overlords because you KNOW those bitches will be figuring out head-lasers and robotic legs right-fuckin'-quick.

So, anyway, the whole movie is "How do we stop the sharks?  No, wait, how do we get out?  No, wait, how do we stop the sharks?"  It's like the horror movie equivalent of Benny fucking Hill.  I expected Yakkity Sax to start playing at any moment!  But, you know what?  That's OK.  If THEY'RE confused, I'M amused and that makes having to put up with Saffron Burrow's neoprene-ensconced Victoria's Secret bearable.

Now, to be fair, she DID use the rubber suit to insulate herself from electrocution.  I said she was anti-feminist not stupid.  Well, maybe a LITTLE stupid since she didn't stop to consider the consequences of, oh, I don't know, TRIPLING THE COGNITIVE RESOURCES OF AN APEX PREDATOR IN ITS NATURAL ENVIRONMENT.  Well, not its natural environment but close enough to it to legitimately plot an escape route and follow through on that plan!

With as much stupid as there is just lying around like a frathouse after a kegger, the plot is pretty tight.  There aren't any large plotholes and, frankly, any movie where I get to see Sam Jackson get nommed on by a genetically-enhanced Mako shark is fuckin' A-OK in my book.  Not because I dislike Mr. Jackson.  I just like to see everybody get their share of the stupid.  I'm a giver.  It's what I do.  It's what I LIVE for.

So, to wrap this up, Deep Blue Sea is not better than Jaws and, frankly, if Sharknado didn't exist, this would still only be in the top ten.  As it stands, though, this is probably my third favorite shark flick after the first two Jaws movies because it's silliness-on-a-stick and I don't think it cares that it looks foolish.  I appreciate that in a shark movie.

I say haul anchor and sail this one on home, boys and girls.