Stomach bug day 3:  I'm delirious.  I have to be.  If I weren't delirious, I would not have wasted the last 2 hours of my life watching what is, quite possibly, the biggest piece of multi-million-dollar-budgeted, diamond-studded, horror-adjacent, five-alarm-chili-in-a-porta-john-after-a-Miralax-smoothie SHIT I have ever had the misfortune to witness in my 43 years on this planet, PIXELS. 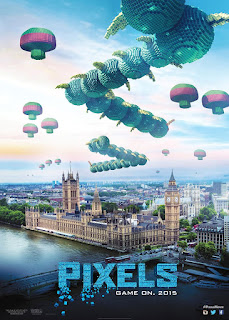 Also, YES, alien invasion movies count as horror-adjacent, even if they DO star Adam "Man-Child" Sandler.

Pixels started out as an internet short.  See Below:

Now that you've witnessed the awesome, let's bring it right back to the suck-tastic world of Adam Sandler's frat-boy money machine.

Let me get this straight.  Adam Sandler plays a person who, in 1982, had the mental acuity to see all the patterns in every video game in existence like some kind of quarter-hoarding Stephen Hawking (along with his friends, the conspiracy nut and the kid who is only good at the claw machine).  He manages to lose the championship with Donkey Kong because there's no patterns at the higher levels and thus begins what is, apparently, the downward spiral that is his life until he's in his late-forties, divorced and unhappy and working as an audio-video installer, a la Geek Squad.  His claw game friend, however, manages to end up as possibly the worst President ever (akin to if Dan Quayle would have won) and the conspiracy theorist still lives in Lainie Kazan's basement pining over a video game character in a manner that would have CSI over there in a goddamned heartbeat if she actually fucking existed.

Oh, it gets better!

Sandler manages to both befriend (for a little while) and offend the female lead who, when she isn't curled up in her closet drinking wine out of a sippy cup (when there is no toddler in sight, sooo...), is a military-esque government official.  He spends 5 minutes of the movie making creepy stalker jokes about her (after attempting to kiss her, unsuccessfully, while she was already intoxicated which tells me he's one of THOSE guys) as she follows him to the WHITE HOUSE where she has a DARPA pass and he, apparently, has an all-access pass to the Oval fucking Office.  ARE YOU FUCKING KIDDING ME?!?

The rest of the movie is him and his man-child friends chasing video game characters around the globe without once experiencing exhaustion which is HILARIOUS since the movie takes place over the course of, like, 4 days and part of it is in fucking LONDON.  They are led to these locations first by Conspiracy-Theorist Olaf who shows them the videotaped broadcast of 80s television clips that include such celebrities as Madonna and Ronald Reagan that interrupted his One Tree Hill binge-session... On videotape... Not DVD, not Blu-Ray... Videotape. Which give them the coordinates of their attacks because the best militaries ALWAYS say where they're gonna be like a schoolyard bully.  (I know Ronnie couldn't have voiced himself but if I find out that Madonna did, I'm burning my fan club card. Just kidding.  I don't HAVE a fan club card.  But if I did...)

Also, how the hell did DARPA come up with light-based weaponry over the course of 2 days when they haven't been able to in the past ENTIRETY OF HUMAN FUCKING HISTORY?  "Oh, wait.  These little pixel fuckers don't like getting hit with lasers.  Let's just whip up working prototypes out of legos and spit and OHMAHGAWDTHEYWORK!"  Or, oh, hey, let's INVENT FORCE FIELD TECHNOLOGY THE DAY AFTER WE INVENT STAR WARS BLASTERS!

Meanwhile, they have to bust out the cheesiest motherfucker ever enshrined in celluloid (Peter Dinklage, who, I'm sure, has spent the last month kicking his agent in the dick) from prison.  His demands include a three-way with Serena Williams and Martha Stewart.  This is disturbing.

Oh, did I mention that every time they won a fight against the aliens, they won a trophy?  Like, "one of their soldiers" trophy?  As in that goddamn dog from Duck Hunt and Q-Bert?  Because slavery is ALWAYS cool.  This becomes relevant in a minute.

See her?  That's Lady Lisa.  She doesn't say a damn thing in the 5 minutes she's on screen.  She goes from righteously kicking ass in the name of her alien overlords to falling in love with a doughy stalker who, literally, calls her his fiancee five minutes after he meets her.  Because Red fucking Sonia up there has no more self-worth than Bigfoot's bunions... 'cause they don't exist, see?

They save the goddamn day and all the aliens go home.  Including Lady Lisa.  Awwww... sad Olaf.  But, oh, look.  Q-Bert, one of the trophies they won, TURNS INTO LADY LISA.  She is now LITERALLY a TROPHY.  Not only that but a trophy belonging to the kid voted Most Likely to Go Full Uni-Bomber.  On what planet did the script-writers think this was a good fucking idea?


No longer are the days of Happy Madison, where it was perfectly acceptable for Sandler to act like a baboon who had somehow managed to find a human skin-suit.  Somehow, though, this news has appeared to bypass Sandler entirely because he still thinks that it's open season for grown men to act like sexist asshats with no ambition and less brains and still manage to save the day.  The end of the movie doesn't even show Sandler's character doing anything useful with his life even though he finally does get to kiss the woman who, by all rights, should have reported him to his supervisors the minute he left her home for invading her personal space and attempting sexual advances.

I know that this movie is supposed to be fantasy but under NO circumstances should this be considered a "family film" unless you want to teach your kids that it's perfectly OK to degrade women who turn them down and that women will automatically fall in their laps and do whatever they want because they're men. No child should be taught that you can get away with not doing anything with your life.  Frankly, no child should be taught that video-gaming is a legitimate career or an actual sport (and I say that as a gamer) but, hey, there are competitions and so forth so that could work for some folks.  I still say get an education.

About the only GOOD lesson, here, is that people CAN be productive members of society after they get out of prison (even if they get released and basically given a government promise of payment in sex because women are commodities).  They couldn't even get "Cheaters Never Prosper" right.  I swear, the more I think about this, the more I'm absolutely certain that Rose McGowan was right and Sandler needs to have his testicles roasted slowly and fed to him.

Seriously, kids, I HATE Adam Sandler and everything he stands for but I wanted to like this one.  I really did.  And it's not badly made from an effects standpoint but in all honesty, the only good thing to happen in this movie is that Sean Bean didn't die. 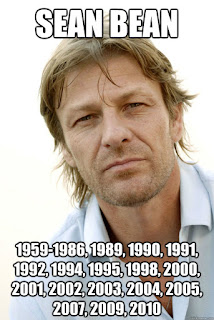 I don't normally want to wish harm to anyone (OK, that's a damn lie) but Adam Sandler needs to be fed to rabid feminists (like, actual feminists infected with rabies who, I'm sure, have utterly correct arguments for the equal treatment of women when they aren't foaming at the mouth and infecting Saint Bernards) right about now.  Everyone even remotely associated with this movie should be followed around for the rest of their lives by the Shame Septa (Game of Thrones, kids.  Seriously?  I had to tell you that?).  There needs to be several pillories and scheduled whippings.  This is a gigantic, mysogynistic mountain of suck that I can never unsee.

I hate you Adam Sandler.  I hate you with the power of a million suns.  From Hell's heart, I stab at thee.  Grow the fuck up and stop making this trash.

And also FUCK YOU.