The Internet is Forever

So, I'm home with a stomach bug of some sort and, me being me, I decided to catch up with some new friends.

Friends that stabbed me in the goddamn back like the lying, cyberbullying bitches they are.

For you see, my tried and true friends, I watched Unfriended. 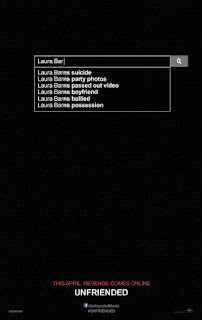 Yeah, if that poster tells you anything, it should be telling you "RUN SCREAMING FROM THIS HORRENDOUS SHITSHOW!"

So, this movie is about your standard teenage shenanigans.  Faux sexting.  Skype in the middle of a school night.  Being young and pretty.

Driving a classmate to suicide via a drunk video posted to YouTube which subsequently leads to the haunting murders of 6 assholes who don't think they're horrible people who spend their time faux sexting, Skyping in the middle of a school night and being young and pretty.

For fuck's sake, this movie STARTS with the "lead" looking up the video that caused this whole dumpster fire to begin with.  AND the video of the bullied individual shooting themselves in the head on school grounds.  (You'll notice that I'm not naming these characters.  It's best they remain nameless.  I don't feel as bad when they end up shoving a flat iron into their bitchy faceholes.)

Oh, and did I mention that this entire movie takes place on a Mac screen?  Because young, pretty, horrible teenagers don't know how to set up the internet in Windows, apparently.  This is not about Mac vs Windows, it's about the fact that they're just reinforcing the fact that teenagers are stupid.  Except for the fat stoner who, apparently, knows how to write multi-platform anti-virus software that downloads and works in 2 minutes because computers are fucking magic.

Don't get me wrong.  I'm kind of OK with the premise of this movie but for real, kids.  If I seriously wanted to watch an hour worth of texting (which is about the total amount of screen time this movie has devoted to instant messaging), I would fucking play World of Warcraft.  At least then, I would have epic loot and game coinage for my troubles and I would have EARNED my death by wandering into an area with high-level monsters wearing nothing but a sword and a smile at level 1 which I would do only because I was trying to be one of the idiot assholes in this movie.

And don't get me started about the "ghost" because that shit was WEAK, yo.  "Let's play a game!"  Seriously?  For real?  You're literally going to play "Never Have I Ever" on the internet to force people to admit that they're more twisted than if an episode of Days of Our Lives managed to have a baby with Cards Against Humanity?  You know that it would actually be easier on both yourself AND the audiences ears if you just went to their fucking houses individually, right?  Plus we wouldn't have to stare at weak computing skills for 2 hours.  How this girl wanted to get any kind of decent job after graduation is completely beyond me.

She used CHAT ROULETTE to get a stranger to call the police.  Ugh.

Look, I get that this was a giant, anvilicious means of getting the anti-cyberbullying message out there but come on, now, kids.  This was lazy film making and you know it.  Unfriended is the world telling me that I really need to find the directors and slap them with a medium-sized tuna. For realsies, this movie isn't even "funny" bad.

Skip it, kids.  Make a donation to The Trevor Project instead.  You'll feel better about yourself.
Posted by BobSmash at 11:26 AM

Email ThisBlogThis!Share to TwitterShare to FacebookShare to Pinterest
Labels: horror, kill it with fire, review, skip it, snark, Unfriended