In Which I Review a Remake, The Original Unseen.

Alright, kids, so you're going to think I'm the most horrible horror fan on the planet, but up until a couple of days ago, I had never watched the original French version of Martyrs.

The line for spanking forms on the left.

That being said, I DID watch the remake prior to watching the original and, frankly, I'm kind of glad that I did. 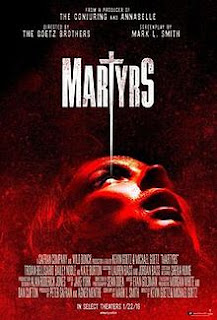 Because, children, Uncle Bob says that this is EXACTLY the reason we don't like Americanized remakes of foreign horror films.

If you've watched the original, you know the story.  Girl escapes from some kind of horrible abusive situation and suffers from some SERIOUS PTSD.  Upon growing up, she decides to take care of her abusers.  She manages to rope in her one and only friend to help clean up the mess.  The friend thinks she's just bonkers (and, yes, she is) BUT, she turns out to have a REALLY good reason.

Now, again, I don't necessarily have a problem with remakes, per se, as long as they're done well and with respect to the original.  Directors Kevin and Michael Goetz, however, seem to have based their film on a description given to them by the people who write ingredient lists on shampoo bottles.

I mean, it starts out OK-ish but they spend ENTIRELY too much time on the childhood part of things, they left out a LOT of the things that made the original a gruesome enchantment and they dumbed down the symbolism WAY too much.  To top it off, they changed the entire second half of the movie.  It's almost unrecognizable in comparison.

Now, I wouldn't have a problem with this if it were done well but it really seems like they tacked on a psuedo-Final Girl aspect to the ending JUST to appeal to an American audience.  (SPOILER ALERT: In Pascal Laugier's version, Lucie dies and Anna becomes the titular martyr.)  I feel cheated.  I feel cheated by the LACK of extreme violence in this film that made the original disturbing and uncomfortable.  I feel cheated by the lack of intellectualism that went into making this film (which is ironic because the film (and the original) is a pretty good allegory about how religion shapes a secular world).

And, most of all, I feel cheated by making a slow burn out of something that was very fast-paced by cutting out a whole shit-ton of the good stuff and replacing it with lips and assholes.

Don't bother with this one, kids.  Set yourself up to read some subtitles and watch the original instead.  You'll thank me.