OK, so it's been a minute and I know I have a lot of absence to atone for so let's dig right in, shall we?

What can we say about The Witch? 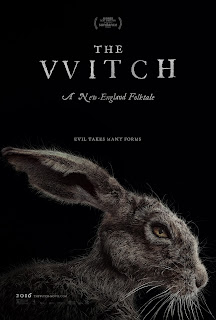 Let's start with some basics.

Ultra religious family gets tossed out of a puritan town for being TOO religious.  Was that even possible?  Did that happen?  "Oh, noes, you love your Jeebus too hard, GTFO"?

Ultra-religious family now has to cope with being outcasts in the wilderness.  Ummm... yay, camping?


The eldest daughter is a TEENAGER?  You don't say.  A teenager in a hyper-religious household with a mother that's gone pretty much insane from guilt after something horrendous happens to the infant?  Nooooo.  That's just not going to end well for anybody.

Cue the father doing stupid shit and keeping it from the mother (Oh, Kate Dickie... you play crazy so well) and bringing the eldest son in on the secret and allowing dear old Mumsy to persist in her belief that the daughter is to blame.  It's nice to see that puritans hated honesty.  Truly.  It's refreshing.  In a time when just about anything can be blamed for witchcraft, a little white lie can go a long way towards utterly destroying someone's life (in this case, their own daughter's), literally, because they were NOT fucking around with that whole "ducking stool, heretic's fork, Judas cradle, burning at the stake" shit.  You almost feel glad that they WERE kicked out of town because if they weren't, the entire town would have been in on this weird shit and out for teenage witch blood.


First off, there hasn't been this deep a Puritan-era horror movie since Witchfinder General.  That's probably a lie but it's my story and I'm sticking with it.  This has "I'm a prequel to The Crucible" stamped directly into it's desaturated, high-tech-thee-thou-ese forehead, even though it's really not because this movie did not display ANY signs of being an allegory for McCarthyism and I'm pretty sure that Arthur Miller did not sign off on that.  Beyond that, there is some actual supernatural shit in here even though it looks like it could be all hallucinogen-ariffic until about 2/3rd of the way through.


Second, what it DOES seem to be is a deep, simple allegory for religious oppression in the home.  As part of the LGBT community, this shit hit home hard and fast and after the Orlando deal, it's particularly poignant.  This girl does everything she can to help out, even though she's clearly exasperated by the situation and the fact that her mother has gone utterly insane with grief, but is still mistreated to the point of LITERALLY being called a monster who is not living in line with the family's faith on the word of two toddlers. I know entirely too many people to whom this has happened in real life for it not to sting.  The end of the film, where life seems right again for our young lady?  Kinda makes you wonder who the good guys of the world really are.

All of this being said, this is a movie you will HAVE to be in the mood to watch and you have to prepare yourself in advance to watch it.  Get plenty to drink and snack on ahead of time and perhaps install a catheter because you have to pay attention.  The dialogue is all in Ye Old-ee Englishe and you can almost hear every middle-schooler in the country going, "Awwww, but I can't understand it, it doesn't have emojis in it!"  There is no "modern English" subtitle track.

It also gets dark and stays dark through the whole movie.  There's VERY little in the way of relief.  You'd expect to laugh at the antics of the twins but nope.  They're as bleak as the rest of them.  Even the coloring of the film.  It may as well have been in black and white.  As it is, it's all shades of grey and tan.

Also, there's not a lot in the way of "action".  It's a very dramatic film.  It plays on the human side of horror and I, for one, appreciate that from time to time.  Since it plays this way, the parts that ARE action-oriented stand out that much more.


Everything considered, the film is stunning.  It is gorgeous from concept to delivery.  The script is tight, the acting is nothing short of brilliance, the atmosphere is relatively claustrophobic, the examination of sin from all angles is spot-on.  I HIGHLY recommend this one.

Email ThisBlogThis!Share to TwitterShare to FacebookShare to Pinterest
Labels: all of the yes, go see it right goddamn now, horror, snark, The Witch