Oh, it feels good to write again.  I'm sorry for the extended leave.  It just... needed to happen.

ANYWAY!  Today we're revisiting Shark Week for a bit and stepping right into The Shallows. 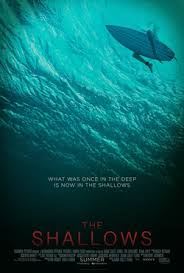 The Shallows is the story of a girl who's given up on life and decides to spend her young adulthood hanging out with unreliable friends who get drunk and hook up with rando Mexican dudes when they're supposed to be all supportive when she wants to find this unknown beach that her mom used to surf at.  She's from Texas, so we don't expect her to be too fuckin' bright but she somehow managed to get into med school and is frittering away her scholarship in a quixotic quest to make her life meaningful again.

For real, though, as a surfer, she should be aware of things like, oh, I don't know, high and low tide and the feeding habits of sharks.  Because the stupid bitch stays out too late in the water when her guide specifically told her "It's gonna get dark soon" like any concerned stranger who won't tell her the name of the damn beach from whom she hitched a ride because hitchhiking is extra goddamn safe, too.  I guess when you're an angsty post-teenager, you're allowed to be self-destructive.  "I'll just call an Uber."  Bitch, I don't know how you're getting a fucking signal to Skype with your fucking family to tell them "Don't worry about me, I'm fine, I'm not talking about why I'm dropping out of med school, stop hounding me, Daddy, Ugh! *angsty post-teenager shoulder slump*"  How the hell you're gonna get an Uber through the hour-long trek through the goddamn rain forest is completely beyond me.  HOW DID YOU GET INTO MED SCHOOL?!?

In case anyone is wondering, Great White Sharks do hang out in the Gulf of Mexico so the premise that one hangs close to a surfer beach isn't too far fetched.  What's far-fetched is the woman believing that she can do a whole lot of shit no normal human can do without being exposed to disease and fucking death.  Nancy (that's her name) decides that the first place she wants to get away from the shark after it has already taken a bite is ON A DAMN WHALE CARCASS!  That's just not sanitary. And, also, whale carcasses are FUCKING SHARK FOOD!

Then, she somehow makes it to this rock/island that only appears during low tide that her new surfer buddies (who still won't tell her the name of this damn beach, telling her "If I told you, I'd have to kill you" because that's not a giant fucking cliche or anything) told her about.  There, she steps on "fire coral" which is totally a real thing, look it up, I'm not doing your homework for you, and fucking sews her leg back together with her fucking earrings.  She was going to be a doctor, dammit.  And she uses that training to set Pete's dislocated wing.  Because Pete is just a parasite that wants people to take care of him. He's also rude and won't let the poor injured, dehyrated, hypothermic, gangrenous girl with the neoprene compression bandage sleep.

And the shark just kinda hangs out because the shark is petty. And eats would-be rescuers and people who try to steal Nancy's shit because... it's... protective... that way?

Many incidents with coral, later, she gets RULL STOOPID.

I can't give away too much of the movie.  Or, rather, I don't WANT to give away spoilers but... y'know... this happens:

And pretty much anything else that can go wrong in the fucking ocean happens.  Whale blubber is flammable, apparently, sharks don't like jellyfish, thin women from Texas don't seem to mind them so much and sometimes metal is not the shark deterrent we would hope it to be.  Also, gangrene isn't as devastating as we thought.

All in all, this was a fun watch.  It was fun because it was entirely ludicrous but it was also exciting and an interesting take on every fucking shark movie trope in existence.  All that was missing was a goddamn voodoo curse.  I mean, I enjoyed hazing the hell out of it quietly so as not to offend other movie-goers but you may like it a lot.  It's not a BAD movie but it didn't get me into that whole "suspension of disbelief" thing that I like, unlike Jaws, which did so impeccably and still does or even Deep Blue Sea which was just such a ride that you didn't care about not believing it.  I just can't say that I loved this one.

I'm still freaked out by the ocean.