Night of Something... I Don't Know What, But Something

I'm really going to have to stop watching things my roommate tells me I should watch because this shit is getting ridiculous, yo.  For today's little fun run, let's take a look at Night of Something Strange. 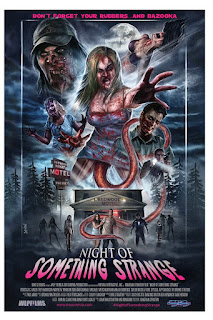 Words cannot adequately describe the revulsion I feel for this film.  Remember how actual, real, paid critics used to say that horror had no redeeming social value?  Yep.  None.  None at all to be found here.  Negative social value is the watchword of the day.  The director, here, needs to be beaten with an oar and pay US for the opportunity to do so.  Because his shit is weak.  Weak and off-putting.  I would rather put my dick in a blender than watch this again.

Because it all starts with this guy:

First off, asshole, if you're GONNA fuck a corpse, at LEAST read the toe tag if you're not the actual cause of death.  It says right there that she died of an STI.  But, noooooooo.  You and your creepy-ass face just neeeeded to get your dick wet.  Probably because no one else was gonna touch you.  I bet you belong to a Men's Rights group and believe that raising a daughter is the ultimate in cuckoldry because you spend 18 years spending money on a girl for other men to have.  Grooooooooss.

SO, yeah.  It all started there and, like all shit, rolled directly downhill, do not pass Go, do not collect $200 (or, rather, $3500 in today's money which I could totally use because I like nice things, go buy my book).

Oh, and OF COURSE we have teenagers getting ready to graduate and going on a beach trip with no parental supervision.  Teenagers who can't stop at the side of the road to pee and, instead, have to use the gross toilet that Necro-Dick pissed blood and pus into AFTER eating the used tampon that was in there because we ALL needed to see that, right?

No, children, I cannot recommend this even as a horror-comedy (which is what it's supposed to be, I guess).  I would not even recommend watching this with a shitload of weed because it's just not that funny.  Maybe if it relied less on toilet humor, I wouldn't have a problem but, as I age, kicking and screaming, toilet humor does nothing but make me want to throw things at my very expensive monitor and that, kids, is a very bad fucking thing.

Don't get me wrong.  I LOVE bad horror but it either has to be the kind of bad that doesn't think it's bad or the kind of bad that knows it's bad but uses the awful to it's advantage.  This movie is neither.  I mean, seriously.  If you're going to give me dick jokes, at least give me some dick and NOT the hideous fucking puppet you so graciously provided.